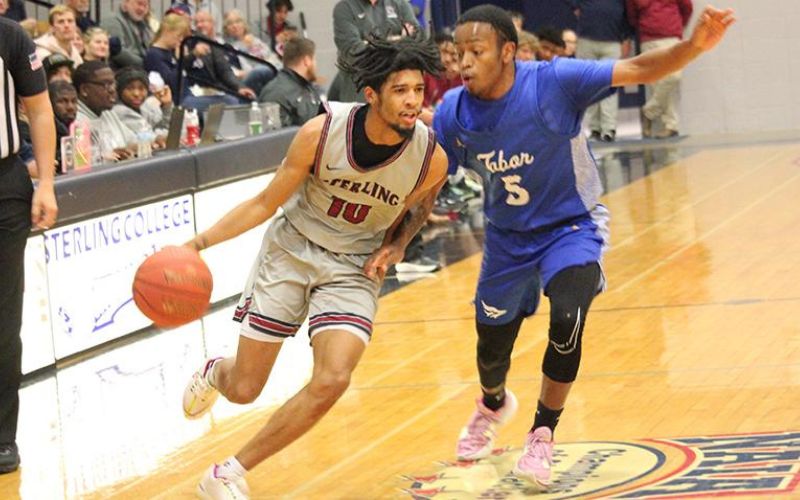 Sterling, Kan. (scwarriors.com) –The Warrior Men’s basketball team has a new look to go along with their new coaching staff. Defensive intensity with a rim protector, and a fast-paced, pass first motion offense has changed the look of Sterling College men’s basketball. Saturday night the Warriors opened KCAC play against the Tabor College Bluejays, another team that is changing its image. After being down early, Sterling found a way to take a lead late, but eventually fell 64-61 to Tabor.

Tabor came out hot to start the game hitting 6 of their first 7 shot attempts; 5 of which were from 3-point range. In less than four minutes, Sterling found themselves in a 17-8 hole that took some time to dig out of. Over the next seven minutes, Sterling chipped away at the deficit, even taking the lead for a moment, before Tabor went on a little run. The Bluejays did most of their damage over the last 4 minutes of the first half, not allowing the Warriors to score in that time and building their lead to 11 at halftime. Sterling trailed 41-30 at the break. It looked like Sterling was focused on running their offense through their big man, Elias Ngoga, making sure he got touches on the block almost every time down the court. This was a trend that continued in the second half.

The second half started slow for both teams. After a first possession made 3 by Tabor, neither team scored for the next two and a half minutes. That streak was broken when Ngoga hit a pair of free throws for the Warriors, their first points of the half. Sterling cut the Tabor lead to 10 over the next 90 seconds. Over the next four minute stretch, neither team was able to put a point on the board. The Warriors broke the scoring drought when they scored 7 in a row on three straight possessions. Will Thigpen and Derrian Reed hit back to back layups and then a big three by Reed concluded the run. After a pair of free throws by the Bluejays, Reed came right back down and hit another three and Thigpen followed it up with another layup of his own to tie things up at 48 with ten minutes to play in the game.

Sterling briefly held the lead before Tabor was successful on two straight possession to take the lead back, this time for good. Sterling was never out of reach in the last four minutes of play, in fact tying the game once again with just over a minute to play. They failed to make that final push and convert when they needed to. Sterling had one more opportunity late to get up a game-tying 3 pointer, but miscommunication caused a turnover just before time expired. The final score was 64-61, Tabor College.

In a year where they may be up and coming, Tabor is now 4-3 overall and 2-0 in KCAC play. Last season they finished just above the Warriors in the conference standings. Sterling is now 3-3 on the season and 0-1 in conference play.

Sterling’s next action is on Tuesday, November 22nd, at 8 pm in Sterling. York University is 4-3 this season and 2-0 in conference play earning wins over Ottawa University and the University of Saint Mary.