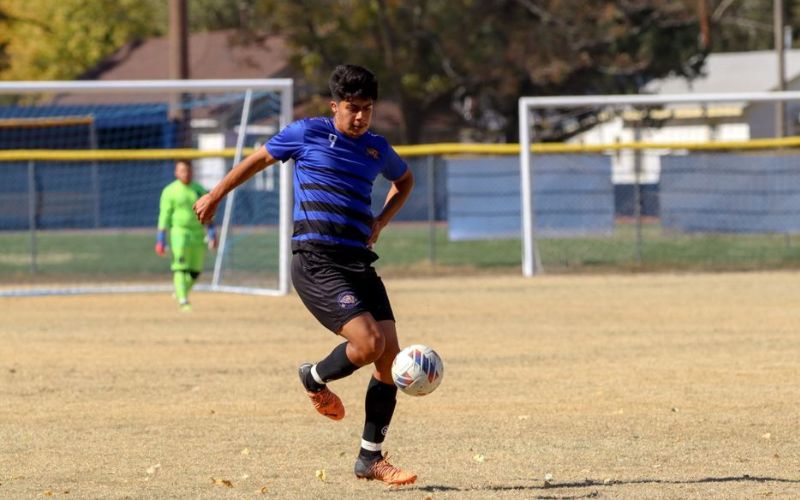 KISSIMMEE, Fla. – The Central Christian College men’s soccer team played to a 0-0 draw with the Covenant College Scots on day one of the NCCAA National Championships.

Nine teams are in the field at the National Championships, divided into three pools. The winners of each pool, and one wild card team advance into the semifinals at the conclusion of the first two days of pool play. The Tigers are seeded 6th and are in Pool A with Covenant College (9th), and Roberts Wesleyan University (1st).

Despite controlling the action, and dominating the box score, the Tigers were unable to find the back of the net against the Scots. They had multiple chances in each half, but most of the shots were right at the Scots netminder. He made two brilliant point blank, reaction saves late in the second half, but they were on shots that he didn’t really need to move for.

One of the best looks for the Tigers came early in the first half. Ayobami Onifade took a shot from the top left corner of the 18 yard box. He bent the ball with his right foot toward the near post. The ball hit the inside of the post just below the cross bar and deflected back into the field of play. Late in the first half, the Scots found the back of the net off of a set piece but the goal was disallowed because the attacker was in an offside position.

In the second half the Tigers had four quality looks. Twice freshman Jeremy McClain found himself with the ball inside the 18 but he was unable to get the ball past the Scots goalkeeper. In the final minute of regulation, the Tiger had the ball deep in the Covenant third and had two chances inside the 6 yard box but each one was stopped by the Scots.
The Tigers out-shot the Scots 20-11 overall, and 5-3 in shots on goal. They dominated the time of possession but lacked execution on the final ball. Sebastian Herrera faced three shots in goal for the Tigers, stopping them all.

“A tough start to our NCCAA national tournament campaign because our expectations were to take 3 points from this game”, said Tiger head coach Aaron Hoxie. “But a draw means that we have all to play for tomorrow. A win and we are group winners, and that’s a goal I believe we can attain.”

He went on to add, “I felt like we did enough to win the game, by multiple goals too. But as things tend to be from time to time, we were wasteful with those chances, and it cost us tonight. We didn’t really play bad, in fact, I thought we were quite good. We controlled the game, the pace, and the spaces were there for us to play in.”

The Tigers’ only hope for advancement to the semifinals is a win against Roberts Wesleyan University on Wednesday. Roberts narrowly escaped with 3 points against Covenant on Monday, winning 3-2 on a late goal. The Tigers and Redhawks will play at 12:00 pm cst.