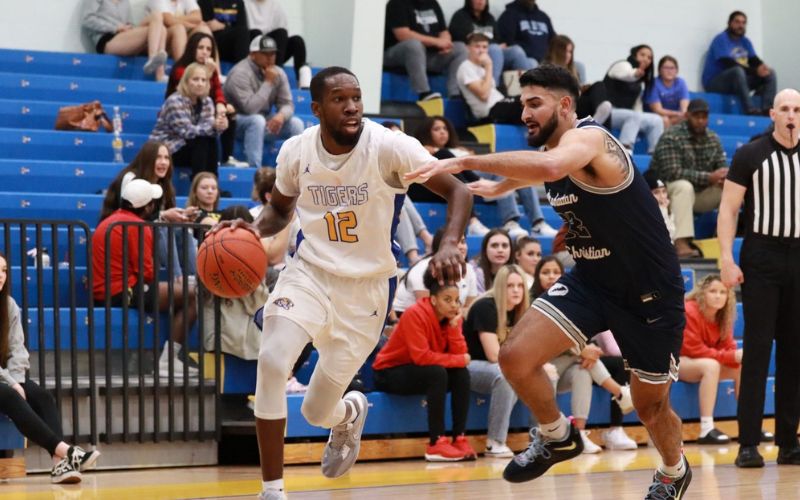 MCPHERSON, Kan. (ccctigers.com) – The Central Christian men’s basketball team made it two in a row on Saturday, wrapping up the “Classic for Christ” with an 85-80 win over the Manhattan Christian College Thunder.

The game was a shootout with neither teams’ defense able to stop the other from scoring. The Tigers led by as many as 13 in the first half, but Manhattan Christian refused to go away. At the end of the first half, the Tiger lead had been trimmed back down to seven points, 53-46.

In the second frame, the Tiger defense continued to give the Thunder open looks, and they took advantage and repeatedly knocked down some big shots to stay within striking distance of the home team. The Tigers stayed just out of reach, a possession or two, for the majority of the half. However, with 1:54 remaining, the Thunder took their first lead of the game, 79-78. On their next possession, the Tigers retook the lead on a wild sequence that ended with a bucket by Isaiah Rivera and then the Thunder being assessed a technical foul for flopping. The Tigers made the free throw and went up 80-79.

The Tigers got some big plays down the stretch from Rivera, and Andre Shelby to escape with a five point win, 85-80.

The Tigers had just six turnovers in the game, while the Thunder coughed it up 13 times. The Tigers scored 13 points off the Thunder miscues.

Offensively the Tigers were hot in the first half, shooting 51%, but ice cold in the second half shooting only 26%. They finished the game at 38%, making 30 of 79 attempts.

Five Tigers once again scored in double figures, led by Joc Lyons with 16.

“We are fortunate to walk away with a win.  Give credit to Manhattan, they are a very scrappy team who are well coached and know how to play.  Offensively, I thought we had a great first half, unfortunately defensively we didn’t match it.  We didn’t close out the ball well and gave away too many rhythm shots.  The second half we had moments where we were better.  However there are a lot of areas where we need to improve and find some consistencies on both sides of the ball. I felt Joc gave us a big boost tonight, he is starting to find some confidence and that makes our team stronger.  Being in close games only helps our team grow.  Down the stretch, we needed to get some stops and make some plays on offense and I was glad for our guys to close the game the way we did in those tough moments.” – Coach Romero

The Tigers are now 2-1 on the season. They have the annual “Mayor’s Cup” showdown with crosstown rival McPherson College, next Tuesday at 8:00 pm at Jerry E. Alexander Arena.