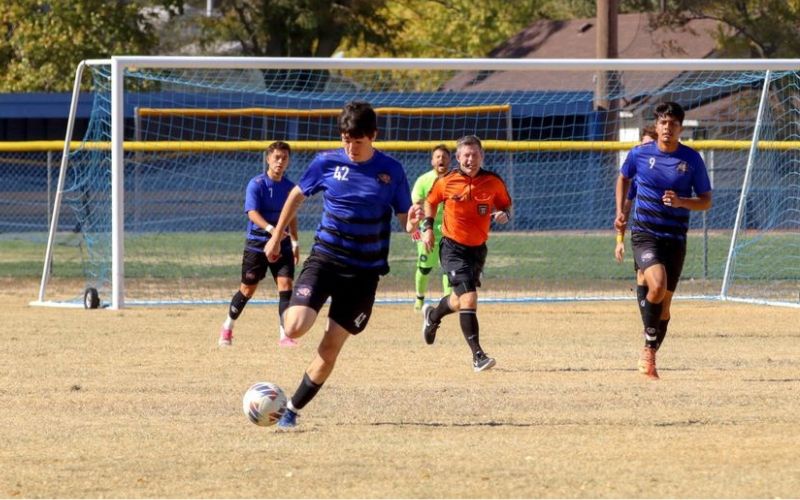 Bethany, Okla. – The Central Christian College men’s soccer team punched their ticked to the NCCAA National Tournament in Kissimmee, Florida in just under two weeks, with a thrilling 1-0 win in overtime of the Central Regional Tournament finals over the Southwestern Christian University Eagles.

Ten days ago on the same field, the Eagles ended the Tigers hopes of a Sooner Athletic Conference tournament run with a 3-2 win, also in overtime. This time it would be the Tigers’ turn to hit the game winner with just minutes left in OT.

The Tigers went on the attack early in the opening half, and had several quality looks. Freshman Marco Cherchi rattled the post with an early shot, and the Tigers earned three early corner kicks. However, from the 25th minute on, the Tigers struggled to maintain possession of the ball for any significant time, and they frequently turned the ball over allowing SCU to counter attack. Fortunately, the Tigers escaped the first half unscathed.

During the intermission, the Tiger coaching staff made some tactical adjustments, and the guys on the field responded with better touch and control with the ball. The Tigers were able to get numbers forward on several occasions but were unable to crack the scoreboard. Late in regulation, the Tigers forced the Eagles into two desperate defensive situations. Edoardo Salmaso hit a shot that forced the SCU goalkeeper into a diving save which he deflected off the goal post, and then in the final minute of the game. Tyler Hoxie got a good look on a set piece that forced another point blank save from the SCU net minder. The game remained scoreless at the end of regulation and the two sides headed for another overtime showdown.

In the 108th minute of action, freshman Camilo Penafiel won a challenge in the midfield. He took a few dribbles down the right side of the field with an Eagle defender nipping at his heels. Near the 18 yard box, he cut the ball back to his left and then crossed a ball with his left foot into the box. Nick Arenare met the ball in stride, and got just enough of his right foot on the ball to send it to the far post under the arm of the SCU goal keeper who had come off his line to challenge the shot. From there, the Tigers had to survive the final three minutes, clearing every ball down the field as far as they could.

Coach Hoxie summed up the match saying, “This was one of those games that held no surprises. This is the 3rd time we’ve played them, we know what they are going to do, and they know what we are going to do. The separator today was always going to be on the defensive end. The team that did that the best was the team that was going to win.” Hoxie added, “I was a bit frustrated at our first half performance. We did not do a good job with the ball. I felt like we were very fortunate to not be punished for those mistakes. They were deadly when we coughed it up. But our back line held firm and with some quality individual plays, we were able to get out of the first 45. We discussed several options for our attack in the second but ultimately we needed to ensure that we stopped turning the rock over, which was causing us significant problems. So, we settled on playing channels and winning second balls. That sort of style is ugly, but it’s very effective when done correctly, and we were rewarded with a goal. I thought we were unlocking not two score several during this period as well.”

Hoxie concluded, “I am very happy with winning the title obviously. But this win is not only for the current guys, but for all of those players that came before that helped pave the way by setting our standard and leaving a legacy that we could build on. They are a part of this.”

The win puts the Tigers at 10-6-4 overall with a chance to increase their win total at the NCCAA National Tournament. The Tournament will get underway Nov. 28 and will run through Dec. 3.