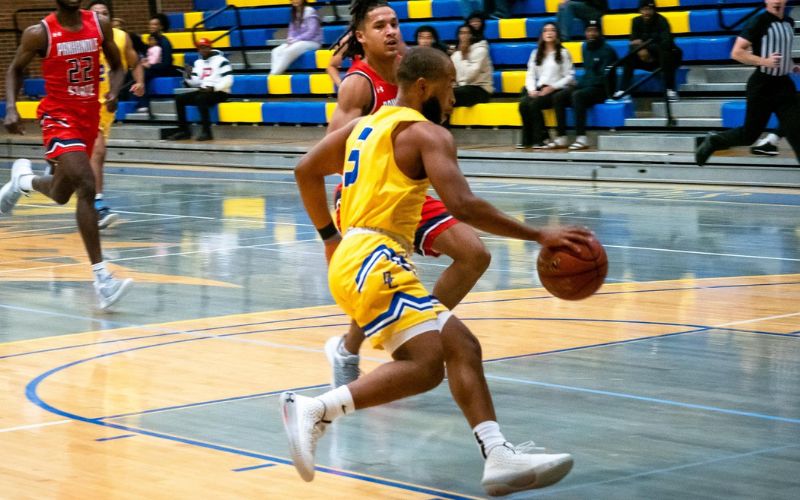 Peru, Neb. – The Swedes traveled to Peru State University to compete in the last Classic before conference play starts. The Swedes fell short against Peru State, losing 74-80. Bethany bounced back the next day and beat Grand View 86-69.

The Bobcats got off to a quick start, scoring first off a layup. The Swedes got on the board three minutes into the half with a layup by Jah-kez Moore. The Bobcats were a few points ahead of the Swedes for the majority of the first half. Working from behind the Swedes stayed in the game with a couple jump shots made by Josh Smith. With 11:36 left on the clock the Swedes took the lead with a three pointer made by Solomon Clayton, making the score 14-13. The Bobcats responded by taking the lead and going up by a few points. The Swedes fell behind 16-26 with 6:35 left on the clock. A steal by Justin Brookens that led to a layup by Dylan Smith shifted the momentum to the Swedes. Three pointers made by Josh Smith and Dylan Smith made the score 24-28. A couple made three throws by Dylan Smith and a layup by Josh Smith put the Swedes only three points behind the Bobcats. Kobe Samake Krajnc put the Swedes on top to end the first half 33-31 with a slam dunk.

The second half started off with the Bobcats jumping ahead, by taking advantage of turnovers. The Swedes stayed in the game and tied it up at 44 points with a layup by Solomon Clayton with 14:41 left on the clock. With a three pointer by Justin Brookens the Swedes were in the lead but were unable to keep the momentum and fell behind. The Bobcats worked up a fourteen point lead, making the score 47-61. Despite being behind, the Swedes worked to close the gap. A layup and a freethrow by Justin Brookens made the score 63-71. The Swedes were unable to overcome the fourteen point deficit and lost 74-80.

The following day the Swedes went up against Grand View University and came out with a 86-69 victory.

Brookens kept it up, scoring a three pointer to start the second half. Solomon Clayton continued the momentum and made a slam dunk to put the Swedes up 48-33. With 10:28 left on the clock the Swedes lead was up to twenty-two points with a three pointer by Brookens. The Vikings were unable to overcome the big lead. The Swedes secured their fourth win of the season.

Justin Brookens scored 37 points on the night by making 9 three pointers and 11 jump shots along with making 6 out of 6 free throws. Solomon Clayton scored 23 points making 9 jump shots as well as 5 out of 6 free throws. Bethany shot 55% from behind the three point line compared to Grand Views 30%. The Swedes shot 78.9% from the free throw line and forced 17 turnovers, while scoring 24 points from turnovers.

The Bethany College Men’s Basketball team will be back on the court Wednesday, November 16th. The Swedes will travel to Salina, Kansas to play the Oklahoma Wesleyan Coyotes for the first conference matchup of the year. Tip off is at 8:00PM in Mabee Arena.