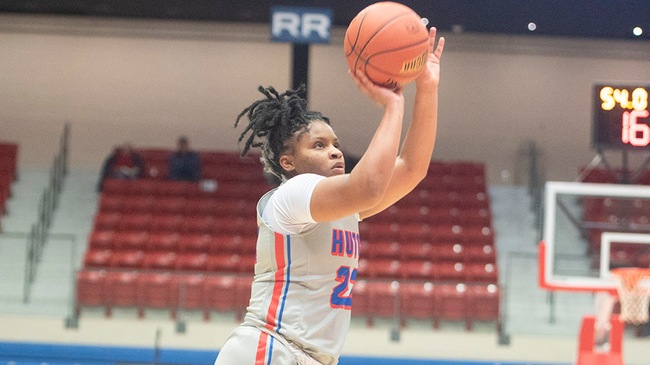 Williams scored a game-high 23 points to lead the Blue Dragons to a 75-66 victory over Cloud County at the Sports Arena, forcing a split of the season series with the Thunderbirds.

Entering play on Sunday, Williams needed 14 points to join Hutchinson’s 1,000-point Club. She reached the milestone with a free throw with 3:41 to play in the third quarter. Williams moved past Dajanae Roebuck and Janay Vulgamore on the career scoring list into sixth place. Williams has 1,009 career points.

Williams led three Blue Dragons in double figures, hitting 5 of 14 overall shots and a pair of 3-pointers. She was 11 of 12 from the free-throw line with six rebounds and four assists. Williams added a career-high six steals.

Freshman Journey Armstead was 6 of 8 shooting to finish with 17 points, seven rebounds and four assists.

Sarah Lawless scored 15 points off the bench to lead Cloud County. She was the only player to score in double figures. The Dragons lead leading scorer Alize Ruiz to four points on 2 of 5 shooting.

A three-point play by Howard with 6:30 to play in the opening quarter gave the Blue Dragons an early 9-4 lead. Cloud County then held the Blue Dragons without a field goal for 4 minutes, 19 seconds and a Lawless 3-pointer with 2:42 to play capped a 9-2 run to lead 13-11. The Blue Dragons regained the lead with scores on three-straight possessions with back-to-back jumpers by Armstead and a Williams 3-pointer for an 18-13 lead with 50 seconds to play. Jessi Brummett scored with 2 seconds to help the Thunderbirds cut the Dragon lead to 18-15 after one quarter.

The Dragons lead 20-15, but the Thunderbirds scored five straight to tie the score at 20-all early in the second quarter. The Dragons opened a double-figure lead with a 7-0 run late in the quarter. Two Williams free throws with 23 seconds left gave the Dragons a 34-24 lead. Cloud County scored with 4 seconds left and the Dragons led 34-26 at halftime.

Cloud County scored the first six points of the third quarter to pull within 34-32 with 7:23 to play. The Dragons went on a 12-4 run and opened a 46-36 lead on an Armstead layup with 2:53 to go. Lawless’ bucket with 2:37 to play stopped that run, but the Dragons closed the quarter on an 8-0 run, getting back-to-back 3-pointers from Armstead and Bree Horyna to lead 54-36 after three quarters.

GAME NOTES – The Blue Dragons are now 48-28 all-time against Cloud County, going 22-12 at the Sports Arena. … Mya Williams now has 131 career 3-pointers. … She had her 14th 20-point game of the season and the 26th of her career. … Morgan Browning had a career-high three steals. … The Blue Dragons are 10-0 at home this season and have won 11 games in a row at the Sports Arena.

Dragons Answer Back with Big Win at Independence