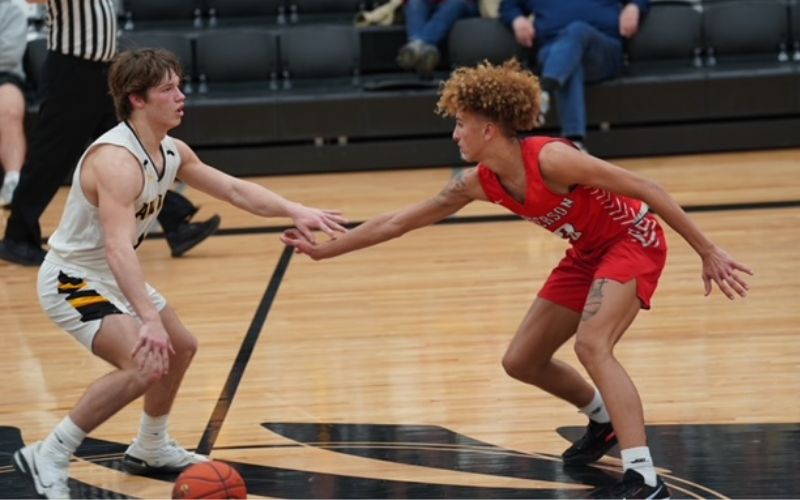 ANDALE, Kan. – With a portion of the Andale State Championship Football team on the basketball team, McPherson Head Coach Kurt Kinnamon and the Bullpup Boys knew they’d have their hands full, as they looked to avenge two losses to Andale from a season ago, and avoid a three game losing-streak.

Cory Muehler was the go-to guy early for the Bullpups on Tuesday, opening the game with three three-pointers, as the Pups would take a 9-2 lead before Andale would call a timeout after seeing the Bullpup junior knock down all three shots from the identical corner. Muehler had 13 of the 18 Bullpup points in the quarter, as McPherson would lead 18-7.

“We started out so good,” said Kinnamon, “had a new little wrinkle for the matchup zone, did a good job of swinging it, Cory makes three three in-a-row, and then it seems like it ought to be easy but, you know, three point shooting you always say is ‘fools gold’.”

Andale came out of the break collecting two straight baskets, forcing Kinnamon to call a timeout, as he recognized the 7-2 momentum swing, which began following a made three at the end of the first quarter. “This is exactly what I expected,” said Coach Kinnamon regarding the matchup. “I told the guys on our scout, they (Andale) want a game in the 40’s.”

As time went on in the second quarter, it appeared the Indians would keep the Pups under 50, as Andale’s matchup zone would put a cold-spell on McPherson, outscoring the Pups 12-8 in the quarter, and at one point getting back within 22-18 before the Pups would take a 26-19 lead into halftime.

After exchanging baskets to open the third, Muehler would knock down his fourth three-pointer to give the Pups a 31-23 lead, before Mason Miller would put on a clinic from the foul line, going 10/10 on the night.

Kreighton Kanitz would also knock down a triple in the quarter, as the Pups would have their largest lead of the game going into the fourth quarter ahead 42-27.

McPherson was patient offensively in the fourth, but they were pressured to maintain a double digit lead, as the 51-36 win, felt much slimmer than the score may have reflected.

Kinnamon concluded by saying, “It’s a hard game because really, we were feeling pretty blue after our tournament, we’d played really hard three nights, and hadn’t had much rest, there’s a lot of excuses, but they’re (Andale) in the same boat, and so I was glad that we were able to make some toughness plays but, when you play them, this is just what it’s going to look like, that’s just the way it is.”

Following the win, the Pups move to 10-3 overall. They will be out of action for 8-days, before going back on the road to face Wichita Collegiate, for a girls and boys contest on Friday, February 3, 2023.