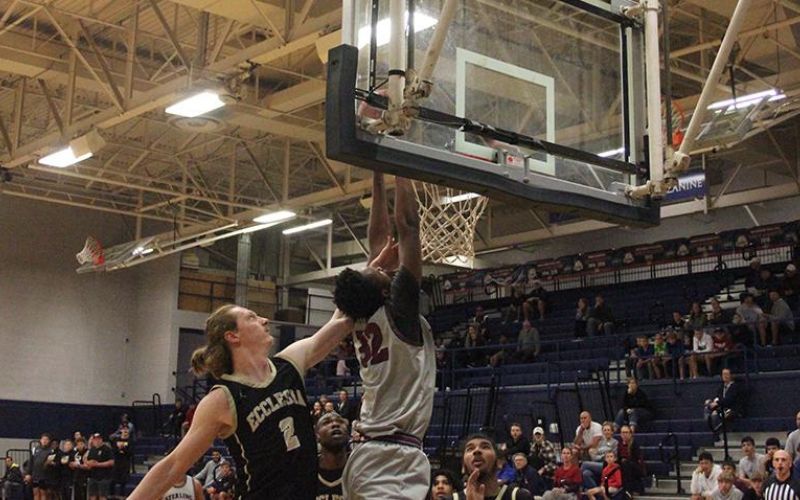 STERLING, Kan. – Sterling College kept up their winning ways on Tuesday night when the Ecclesia Royals came to Sterling for a nonconference, early season matchup. Sterling College (2-1) fought hard to put together back-to-back wins for the first time since the 2020-21 season. The Warriors were able to come away with an 89-79 win in their home opener.

Early on the Warriors relied on the post play of Elias Ngoga as he scored 7 of Sterling’s first 11 points. The first twelve minutes belonged to the Warriors until Ecclesia hit a big 3 with just over eight minutes left in the first half to tie the game at 21. That three was part of a 21-5 run for the Royals that opened up an 11 point lead with two minutes to play in the half. Sterling brought the lead back to just four points as they finished the half on a 10-3 run. Sterling trailed 40-36 at the break.

The Warriors chipped away at the lead early in the second half and knotted the game up at 51 apiece with fourteen minutes to play. From that point on Sterling slowly took over the game. Will Thigpen hit a jumper to give the Warriors a two point lead and Sterling did not give it up again. Using a number of different scoring options, Sterling slowly built a double-digit lead as time began to wind down. Solid defense and smart offense helped the Warriors to manage the clock and not allow the Royals back into the game. Ecclesia made one last strong push with three minutes to play in the game and cut the lead to 5. Sterling absorbed the run by the Royals a pushed the lead to 8 with just thirty seconds to play. From then on, Cedric Rollerson knocked in 6 straight free throws to put the nail in the coffin for the Royals.

All five Warriors starters scored in double digits, led by Ellias Ngoga and Derrian Reed, each with 22 points. Cedric Rollerson scored 17, including going a perfect 8-8 from the free throw line. Lucas Briar scored 11 points and had 11 rebounds to secure a double-double for the Warriors. Ngoga and Will Thigpen fell just one rebound shy of double-double performances themselves.

Sterling shot 53% from the field, 31% from 3-point range and incredible 89% from the free throw line hitting 24 of 27 attempts. Sterling won the rebound battle nearly 2-1.

The Warriors head to the Tabor Classic Friday and Saturday and will take on Randall University and Hasting College. Game times are 4 pm Friday and 1 pm Saturday.