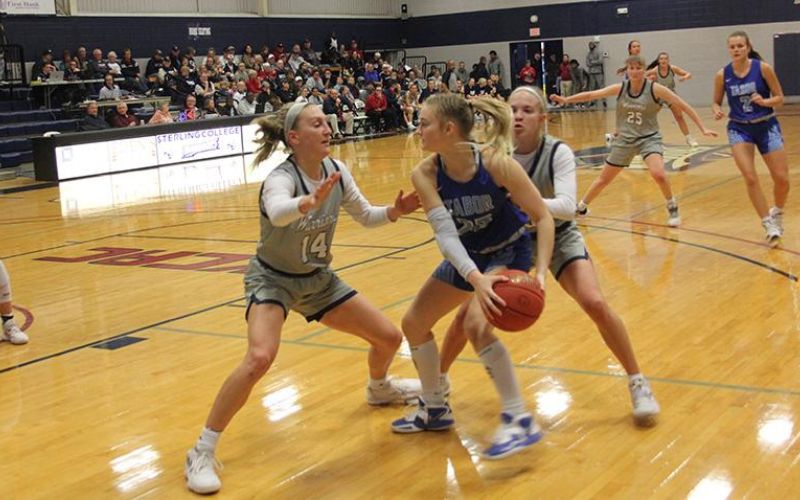 STERLING, Kan. – The Sterling College Lady Warriors opened the conference season against the Tabor College Bluejays. Sterling was picked to finish the conference in first place and Tabor was picked to finish second. The game was as tight as was to be expected with several lead changes and the largest lead by either team was just 6 points. Sterling took the loss by that same margin, 65-59.

The first quarter was as close as could be with seven ties and three lead changes. Taya Wilson paced the way for the Warriors early scoring 7 of the first 11 points. She ended up scoring 8 points in the quarter and grabbed 3 rebounds. Freshman, Jaley Barkley made her Sterling College debut in the quarter. Sterling led 17-16 when the first quarter came to a close.

Quarter number two was much like the first. Neither team could pull away. Sterling opened up a five point lead early on but struggled to keep the margin. Tabor had the lead cut down several times to two points but wasn’t able to get the score tied until just over 2 minutes left in the half. With 14 seconds remaining in the half, Tabor took the lead, but the lead was short-lived as Bailey Albright hustled down the court to get one more shot before the half. As time expired Albright pulled her patented spin move with the left-handed finish. Heading into the half, Sterling held on to the slimmest of margins, 34-33.

The third quarter was owned by Tabor. The Bluejays came out and got a bucket early to take the lead and held the rest of the quarter. It was a low-scoring affair by both teams with the Warriors being outscored 12-9, their first time being held in single digits in any quarter this season. With aggressive defense on both ends of the court and lackluster offense at the end of the third quarter, Tabor was barely holding on to a 45-43 lead.

The beginning of the 4th quarter brought on an offensive onslaught. Kali Briar, who was scoreless through three quarters, hit three 3 pointers in the first 3 minutes on set plays for the Warriors, single-handedly equally the third quarter output. Unfortunately, the scoring push was matched basket for basket as the Bluejays hit a jumper and a pair of triples to keep pace. Tabor finally took control in the last 3 minutes and did not relinquish the lead. In the fourth quarter, there were 5 ties and 4 lead changes reflecting the battle that was going on between these two KCAC powerhouse programs. In the end, it was Tabor who walked out of Sterling with a 65-59 win.

Tabor held Sterling to its lowest scoring output of the season, almost 20 points below their season average. Having won back to back regular season and tournament titles, the Warriors definitely have a target on their backs and, as seen in this game, they will have to bring their best game every night.

Taya Wilson and Bailey Albright led the way for the Warriors. Wilson had 15 points, 9 rebounds, a block and no turnovers. Albright scored 12 points, 3 rebounds, 3 assists and 2 steals. Karsen Schultz was held in check offensively but still grabbed 6 rebounds for the Warriors. In her Warrior debut, Jaley Barkley scored 4 points and grabbed 3 rebounds and added an assist in 9 minutes of play.

Sterling College returns to action on Tuesday, November 22, at 6 pm when York University comes to Sterling. Sterling will be hosting a food drive that evening; adult admission is worth 2 canned goods and child admission is worth 1 canned good. Come out and support your local food banks Tuesday night as we celebrate this Thanksgiving holiday season.