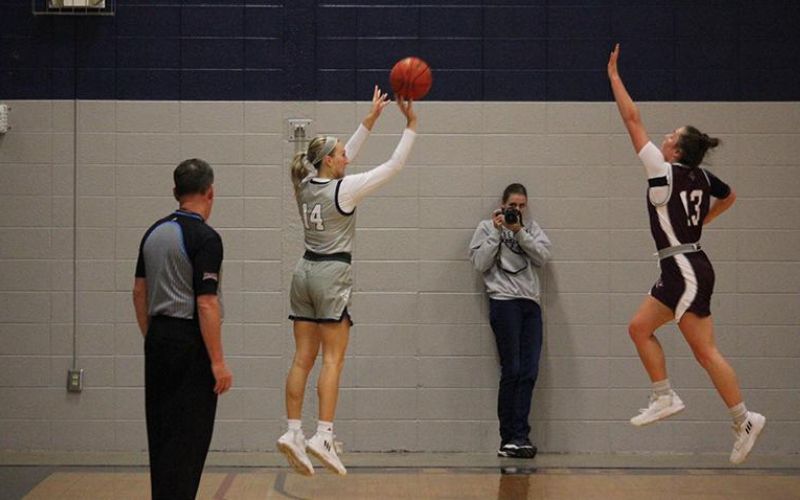 Fayette, Mo. (scwarriors.com) – The competition has been tops in the NAIA this season for the Lady Warriors. Tuesday’s matchup was no different as the Lady Warriors traveled to Fayette, Mo. to take on the undefeated #9 Central Methodist University Eagles. After being tied late in the third quarter, Sterling faltered in the fourth quarter and took a 75-64 loss.

It took the Warriors four minutes to get on the scoreboard Tuesday night. In that same four minutes, CMU scored 15 points and the Lady Warriors found themselves in a big hole early. In the last six minutes of the first quarter, balanced scoring helped Sterling to keep pace with the high-powered CMU offense. In fact, the Warriors were able to cut into start cutting into the Eagle lead and trailed 26-15 after one quarter of play.

The second quarter was two great teams matching blows. Sterling would cut into the lead and CMU would answer back. For ten minutes that was the story. Heading into halftime, Sterling was down 43-33, gaining back one point against the Eagles.

Sterling’s third quarter may have been their best of the season. Sterling used their full court press most of the third quarter and it tilted the scales in their favor. With 6:12 left in the third quarter, CMU scored their last point until hitting a last second basket to end the quarter. Sterling went on a 14-0 run in that stretch, thanks in large part to their pressure defense which forced 7 turnovers in the quarter, and tied it at 53 with just over thirty seconds left in the quarter. An unfortunate turnover by the Warriors, confusion over the shot clock horn versus the game clock horn, cost the Warriors a last second possession. Instead, CMU got the ball under their own basket with 3 seconds on the clock and made a layup as time expired to hold onto a 2 point lead after three quarters, 55-53. Sterling’s defense held CMU to just 12 points in the quarter.

As good teams do, CMU regained their composure in the fourth quarter and upped their defensive intensity. They quickly built their lead back to 7 and that is where it hovered the rest of the night. Sterling was held scoreless in the last four minutes of play and ended with an eleven point loss, 75-64.

Karsen Schultz and Taya Wilson paved the way for the Warriors. Schultz scored 24 points and added 6 rebounds and 4 steals off the bench. Wilson recorded her second double-double of the season scoring 15 points and tallying 15 rebounds, her second 15-rebound performance in as many games. Bailey Albright and Bethany Stucky each had 8 points. Albright added 7 assists and Stucky brought in 7 rebounds as well.

The Warriors have had a tough nonconference schedule this season and has given them a good idea of where they stand with the nation’s best; right there beside them.

Sterling begins conference play on Saturday, Nov. 19, against Tabor College at 5 pm on Sterling’s campus in the Gleason Center. Tabor is picked to finish second this season in the KCAC preseason polls so the competition continues right out of the gate for Sterling.