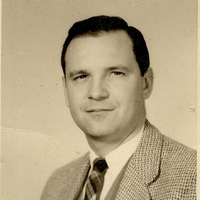 His father had operated a Hardware store in Sidney for many years and in his younger days had raced and sold Indian and Yale Motorcycles, and his mother’s family were dairy farmers.

Paul attended Sidney High School and graduated from Ohio Wesleyan University prior to entering military service in 1953. He served two years in England as an officer in the USAF and upon completion of his tour of duty in England, he enrolled as a student at the School of Divinity - The University of Edinburgh, Scotland where he began translating Egyptian Hieroglyphs and Sumerian Cuneiform.

Upon completion of his first research trip to the Holy Land, Egypt and the Middle East, Paul returned to Ohio where he entered the Athenaeum of Ohio: Mount St. Mary’s Seminary & School of Theology where he completed an additional four years of studies in Religion and Education. His divinity education was both Protestant and Catholic.

Paul “Sonny” s parents had owned a winter home in Coral Gables, Miami, Florida since the 1930’s and Paul’s love of archaeology, historical research and nature inspired him to learn how to scuba dive so that he might expand his knowledge diving shipwrecks and underwater archaeological sites. He soon moved to Tavernier, Florida in the Florida Keys where he opened his business, “Monroe’s Marines Aquarium” a Marine Products business exporting live salt water tropical fish from the Keys, the Bahamas and the Gulf of Mexico.

Upon the death of his dear father, Paul inherited some stocks and his beloved parents’ winter home in Coral Gables, Miami, Florida where he lived for decades while he continued to operate his Marine Products business.

Paul remained, first and foremost though, a dedicated Biblical Researcher / Translator of Ancient Languages and he had a life-long passion for translating Sumerian Cuneiform tablets and Egyptian Hieroglyphics because they serve to verify various aspects of the Biblical account, especially names and places.

In 1999, he left Florida in search of “peace and quiet”, and he felt that God had directed him to his rural farmstead in Plevna, Kansas, so that he could devote his life to his work. He told his friends and family that he intended to live there and continue working on his research until he died and he held fast to his desire to remain in his own home, immersed in all of his beloved Egyptian, Sumerian and Biblical research, until he died.

Private family services are scheduled to be held at Our Lady of Guadalupe Trappist Abbey in Lafayette, Oregon in January 2023.

In lieu of flowers, the family requests that expression of sympathy take the form of donations to the Hutchinson Animal Shelter, to reflect Paul’s love of animals.