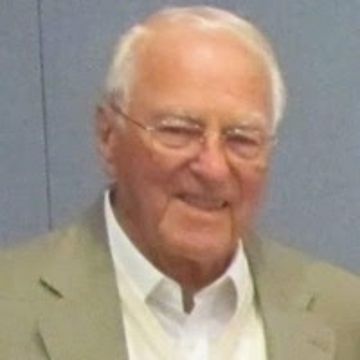 George graduated from Hutchinson High School and attended Hutchinson Community College. He served in the United States Army from 1944–1946, serving in the European theater. George was awarded the Purple Heart for wounds he sustained in combat. He worked as a salesman for Earl Brown Wholesale and retired as manager for Namee. In his younger days, George played semi-pro baseball. He loved helping with harvest on the Leonard farm. George joined First United Methodist Church on December 4, 1932, and was an active member of the church throughout his life. He was also a member of Hutchinson-Reno Masonic Lodge #124 A.F. & A.M. and American Legion Lysle Rishel Post #68.

George is survived by: his daughters, Ronda Moyers (Roy) of Oklahoma City, Debra Leonard (Earl) of Hutchinson; grandson, Eric Leonard (fiancé, Katlynn Queen); and a host of nieces and nephews.

He was preceded in death by: his parents; infant granddaughter, Haley Nichole Leonard; sister, Marguerite Cook; and brother, Bill Francis.

Friends may sign his memorial book from 9 a.m. to 5 p.m. Thursday and Friday at Elliott Mortuary.

Memorials may be made to Reno County Veterans’ Memorial, in care of Elliott Mortuary, 1219 N. Main, Hutchinson, KS 67501.