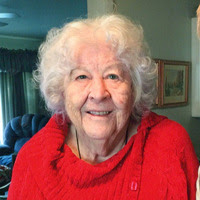 Earline Laura Costley Carnes , age 100, passed away Saturday , December 3, 2022 at Leisure
Homestead in Stafford Kansas. She had been a resident there for 3 years, moving from Webb
City, Missouri.

Earline was born near Monett, Missouri on February 8, 1922. Her family moved to the Carl
Junction Missouri area where she graduated from high school in 1940. Perseverance was one
of her gifts and after many years of working full time and earning an Associate degree at Joplin
Junior College (Missouri Southern ) she accomplished her goal of graduating from Kansas
State College (KSU) in 1953 with a B.S. in Home Economics.

Upon graduation, she was employed as the Wilson County Extension Home Economist in
Fredonia, Kansas. There she met Kenneth L. Carnes. They were married December 27,1953 in
Joplin, Missouri. To this union were born two daughters. The family moved to different towns
in Kansas as Kenneth received job transfers as Farmers Home Administration Supervisor.
Laura Suzanne was born in Washington,Kansas. Daughter Carol Jean was born in Stafford,
and the next move took them to Wellington until 1969 when they moved to their farm near
Pittsburg, Kansas. After Kenneth’s death May 24, 1997, Earline moved to Webb City, Missouri
and lived there until 2018.

Earline was active in several United Methodist churches, in her daughters’ activities and as a
member of various clubs. She taught elementary school and was a substitute teacher in
Wellington until the family moved to their farm. There she helped Kenneth with the farm and
cattle operation and was a 4-H club community and project leader. She was a talented
seamstress and enjoyed travel and refinishing furniture. Her true passion was gardening;
growing large vegetable, fruit and flower gardens. She enjoyed collecting and trading flowers.
She was happiest outside enjoying God’s creation. A prolific reader, she read daily newspapers
and The Wall Street Journal well into her late nineties. Visiting with family and friends was her
joy as well.

Earline is survived by a daughter Suzanne( Don) Hildebrand of Stafford, Kansas and
grandchildren and great grandchildren: Kent and Rebekah Hildebrand and their daughters ,
Harper, Holland and Maize of Manhattan, Kansas; Laurie and Heath Vincent and daughter
Lilllian Laura and soon to be born Lincoln of Wamego, Kansas; Josh and Bethany Hildebrand
and daughters Lydia, Hannah, and Elyse of Bel Aire, Kansas ; son-in-law Larry Heller, children
Laura Katherine and Will of Bethesda, Maryland . Earline is also survived by her sister Sue
(John) Fredrickson of Webb City, Missouri, and many nieces and nephews.
Earline was preceded in death by her husband Kenneth, daughter Carol Carnes (Larry Heller),
brothers Roland Costley, Ralph Costley , Bill Costley and a sister, Paula Dill.

Private burial will take place at Evergreen Cemetery in Ft. Scott, Kansas with a Celebration of
Life service later this February. Memorials may be sent to the scholarship fund Earline began
at KSU. Contributions may be sent to: KSU Foundation and please indicate the Kenneth L.
and Earline L. Carnes Scholarship Fund, number 05595, in care of Minnis Chapel, 125 N.
Main, Stafford, Kansas 67578.

To send a flower arrangement or to plant trees in memory of Earline L. Carnes, please click here to visit our Sympathy Store.