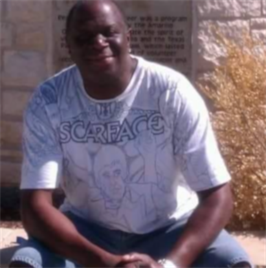 Calvin Neal, Jr. was born on January 19, 1966 to Calvin Neal, Sr. and Birdie Louise Biggs in Oklahoma City. He was known to all as “Junior”.
He attended Willow brook Elementary, Parker Elementary and Star Spencer High School.
Calvin was a life member of Greater Coates Temple Church of God in Christ under Superintendent Ernest Byrd until his death. He played the drums and sung in the choir. His favorite song was “Holy Ghost”. No one could sing it better.
Calvin loved to make people laugh. He loved to play his oldies music and old gospel. He loved to call you and play his favorites. He loved his animals. He would often send you pictures of his gigantic fish. He loved to cook and BBQ. Most of all he loved his family. He loved his grandchildren. He never met a stranger.
God called Calvin home on June 20, 2022, after a brief illness. He is preceded in death by his father, Calvin Neal, Sr. one sister Coretta Evette Neal-Woods and one daughter Jacquelyn “Mercedes” Malloy.
He leaves to cherish his memory, his mother, Birdie Louise Biggs; seven children, Domnick Meadows, Calvin Neal III, Marcus Meadows, Michael Neal, Juanita Neal, Jasmine Flowers, and Kellie Addison; one brother Lonnie V. Neal; two sisters LaTasha Jackson and Lawonda Neal Stanfield; two special brothers, Charles Woods and Marvin Preston; and his favorite hanging buddy Frantz Stanfield III. He has 34 grandchildren. Calvin also leaves behind a host of uncles, aunts, cousins, nieces, nephews and friends who loved the gentle giant. He will truly be missed.  Hutchinson Funeral Chapel is handling the arrangements.