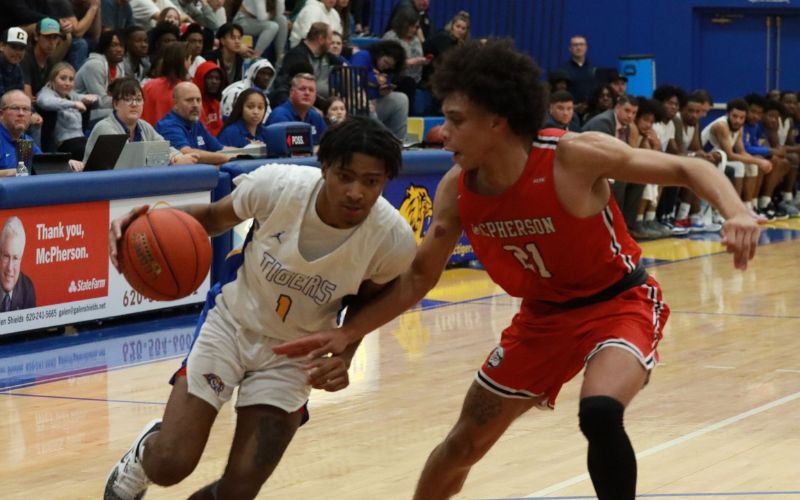 The Tigers got 23 points from both Isaiah Rivera and Andre Shelby to get the program’s first win over the Evangels since joining the SAC. It was also their first win over MACU since 2004.
The Evangels jumped out to a quick lead over the Tigers in the first half, opening with an 8-0 run. By the 14 minute mark, the lead was 15-2 in favor of the visitors. With 7:35 remaining in the half, the lead was still double digits at 26-15, but in the final 7 minutes of action, the Tigers out-scored the Evangels 16 to 5 to knot the game at 31 as the teams headed into the locker room for the halftime intermission.

In the second half, the Evangels built up a seven point lead, but the Tigers once again fought back. With 5:48 remaining in regulation, the Tigers evened the score at 55. With just over a minute left, the Tigers took their first lead of the game 61-59 on a layup by Rivera. With 32 clicks on the clock they had their largest lead of 4, 63-59.

Rivera and Shelby were exceptional for the Tigers. They combined for 46 points, 23 rebounds, 8 assists, 4 blocks, and 5 steals.

Defense was the key to the Tigers’ win over MACU on Saturday. They held the MACU offense to 33% shooting from the floor, and 27% from beyond the 3 point arc. They also held the Evangels’ leading scorer DaRaun Clark, who came into the game averaging 18.5 ppg., to just 12.

Offensively the Tigers shot 38% from the floor, making 25 of 66 attempts.

The Tigers won the turnover battle 10 to 11 but were outrebounded by the Evangels 52 to 44.

“The guys really battled on the defensive side of the ball tonight.  After a poor first 5 minutes where we were down 15-2, we saw some shots go in and we settled in on defense.  We have been really searching for some identity on that side of the ball, tonight we touched some of that.  MACU is in the top two in conference in field goal percentage and points per game on offense and we were able to hold them to 33 percent and 64 points.  We finally showed some grit and toughness there and I am really proud of our men.  When we shot the way we shot tonight, it’s nice to walk away with a win because of our defense.  We made some timely stops down the stretch and converted to give us a 4 point lead late, add on some huge free throws by Senior Isaiah Rivera, made for a big conference win at home.  Special shout-out to our men’s soccer team for providing some energy tonight, it’s Thanksgiving break and they made us feel their presence with having a limited crowd due to break.” – Coach Tony Romero

The Tigers are now 3-4 overall, and 1-1 in the SAC. They will play a pair of exhibition games next week, before returning to SAC play on Nov. 29 on the road at Langston. Their first exhibition is on the road next Tuesday at NCAA DII Fort Hays State University. Tip-off is scheduled for 7:00 pm.