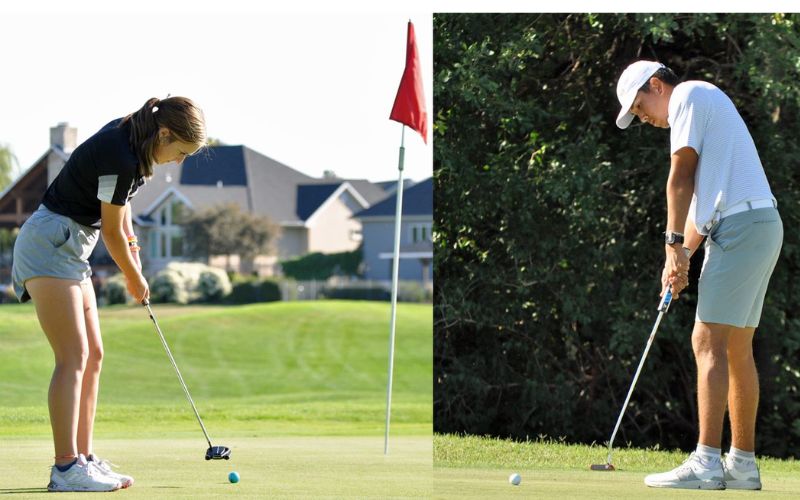 WICHITA, Kan. (CCCTigers.com) – The Central Christian College men’s and women’s golf teams were back on the links this week, down in Wichita, Kansas playing in the Crestview Fall Invitational hosted by the Friends University Falcons.

The conditions were unseasonably hot, and windy, but the Tiger men and women persevered and had a strong finish. The Tiger women finished the 54 hole tournament with a runner-up performance, shooting 349 the first day, and 352 on day two for a total of 701. The Tigers were the top NAIA team in the field, the only team better was Dodge City CC.

Below are the rest of the Tigers’ scores.

Coach Moody commented on the women’s performance saying, “You might look at our scores and think this wasn’t our best tournament, but I would tell you that we did some great things this week. Some things I haven’t seen us do before. Grace Little holed out from 140 yards on #2 in Round 2. It was one of the best shots I have ever witnessed live and it was great to be there to celebrate with her in the moment! With six holes to play the ladies were three strokes out of 2nd place. I challenged each of them, to find a way to make up a stroke on the 2nd place team every two holes and they responded, so well! As a team we went from three down with six to play to solidifying the runner-up spot by 5 strokes. That is a credit to the ladies grinding it out and finding a way to score.”

The Tiger men came home with another to five performance, their third this season, finishing in 3rd place, one stroke behind the runner-up. The men’s teams played 36 holes on Monday and the Tigers had matching 299s in the rounds. On Tuesday they finished with a 301 in the final 18 holes, giving them at total of 899. Friends University defended their home course winning the tournament with an 877 going 295, 291, 291 winning by 22 strokes.

Below are the other individual scores and finishes for the “A” team.

Coach Moody summed up the tournament for the men saying, “Crestview was in great shape and is a different style of course than we have played so far this year and it really tested how many different shots we had in our bag. We came up one stroke short of 2nd place. With a couple holes left we made some good shots where we got a couple of bad breaks or bad bounces that really cost us some strokes, but that is golf. I am proud of the way the guys battled and even through the bad breaks we kept our composure on the course and I think each of the guys learned something about their game this week, which will help us as we move toward the NCCAA National Tournament.”

The Tigers are off next week, but will hit the links again on October 3rd and 4th down in Chickasha, Oklahoma for the Battle at Winter Creek, hosted by USAO.

First Half Scare from Mulvane, Leads to 28-Point 3rd Quarter for McPherson High