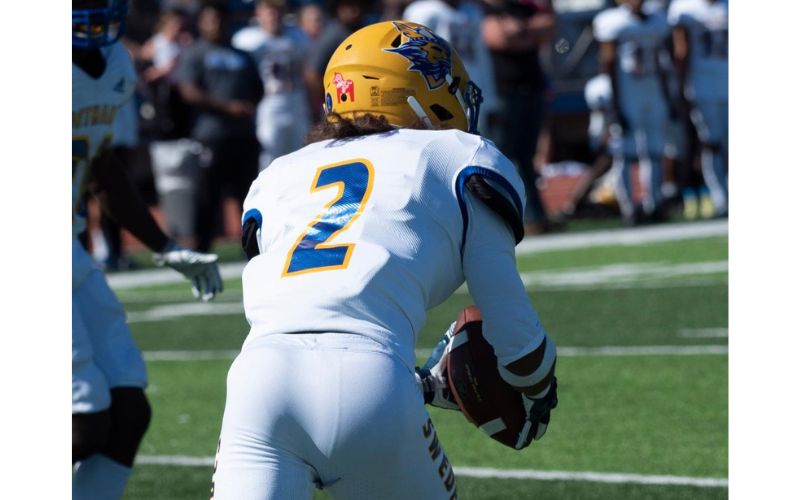 Salina, Kan. (bethanyswedes.com) – The Bethany College Football Team took the road to Salina, Kansas to face off against the Kansas Wesleyan University Coyotes in the 112th meeting between the two schools. The Coyotes took this one 49-6.

On Kansas Wesleyan’s first drive of the game, freshman defensive lineman Emmett Robinson forced a fumble, and it was recovered by sophomore linebacker Julian Carpenter.

Senior running back J.J. Allen struck first with a 1-yard score to cap off an 11-play, 72-yard drive in which the Swedes took the lead 6-0.

In the second quarter, sophomore cornerback Mario Louis made a huge stop by intercepting a pass in the end zone and was able to return it to the Bethany 12-yard line. Later in the period, the Swedes were able to help force a missed field goal to prevent the Coyotes from adding to the lead.

In the third quarter, Bethany was able to cause another red zone turnover. Freshman defensive back Keanu Ebesu forced a fumble that was recovered by senior defensive back Jaylin Talbott and returned to the Bethany 9-yard line.

Leading the passing attack for the Swedes was freshman quarterback Alec Giragosian with 87 yards in the air. J.J. Allen led Bethany’s run game with 51 yards on 14 attempts and scored the lone touchdown for the Swedes. Allen also led Bethany in receiving yardage thanks to a 69-yard pass from sophomore wide receiver Demetric Toney. Senior wideout Aaron Tillak led the Swedes in receptions with 5 catches for 31 yards.

As a team, Bethany tallied 202 yards of total offense averaging 3.3 yards gained per play. The Swedes would record 12 first downs while going 4 for 16 on third downs. Time of possession would show to be pretty even as the Swedes held the ball for 28 minutes 50 seconds out of a possible 60 minutes.

The Bethany College Football Team will host the Bethel College Threshers in the first ever “Light It Up Blue” Autism Awareness game in Lindborg, Kansas. Kickoff is set for 1PM CT.

Grossner Announced as Next Head Football Coach for the Swedes

The Bulldogs Dominate the Coyotes on Senior Night