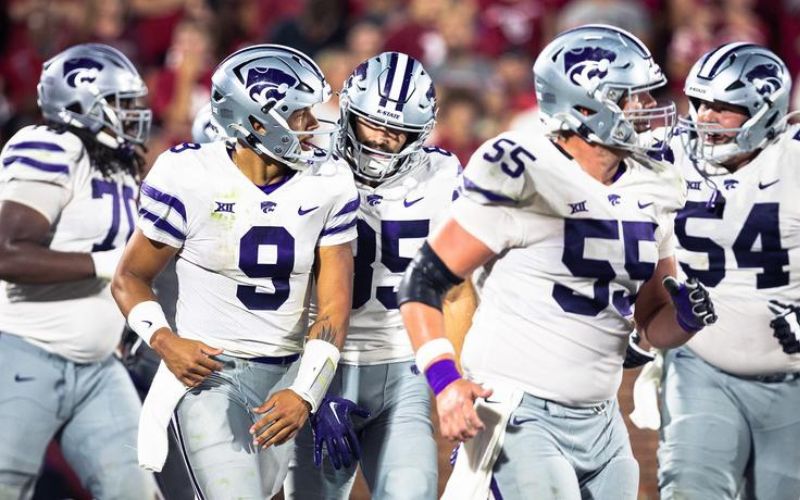 MANHATTAN, Ks. (KstateSports.com) – Kansas State turned Norman into a purple party in a 41-34 win over No. 6 Oklahoma this past Saturday, marking the third time in four meetings that they defeated the SEC-bound powerhouse, including back-to-back wins at Memorial Stadium.

However, the party was just getting started once the K-State team busses pulled into the Vanier Family Football Complex parking lot early Sunday morning: They were greeted by the entire K-State marching band and Classy Cats.

“Thanks to Dr. Frank Tracz and the Pride for being here at Vanier when we got back,” K-State head coach Chris Klieman said at his weekly news conference. “Our kids loved that. It’s one of the neatest traditions that’s around in college football. To see guys like Josh Hayes and Kobe Savage and Adrian Martinez, or any new player, to see all the band members and cheer squad, that’s special. I can’t thank Dr. Tracz enough for getting that done. We got home at 3 or 4 a.m.”

It’s been quite a past few days for Klieman and the Wildcats.

“It’s pretty cool, but we know rankings don’t mean anything after what happened last week,” K-State linebacker Austin Moore said. “We have to keep the same mindset and the same chip on our shoulder no matter what.”

“We’re off OU now and onto Texas Tech,” Savage said. “We’ve got a full head of steam, a new team, and this is a 1-0 season, so we’re taking each game as a season. We’re really excited to play them.”

And K-State’s preparations continue for the Red Raiders, who come off a thrilling 37-34 overtime win against No. 22 Texas.

K-State has won 10 of the last 11 meetings against Texas Tech, which seeks its first victor in Manhattan since 2008.

“We talked about it (Monday) and it’s really 12 one-week seasons in college football,” Klieman said. “That’s what it is, guys. It doesn’t matter what league it’s in, anybody can beat anybody, so you’d better prepare and upgrade preparation and focus, and this week it’s no different with Texas Tech. It’ll be an exciting Saturday at the stadium.”

Although K-State has won 10 of the last 11 meetings and has faced three different head coaches — Tommy Tuberville, Kliff Kingsbury and Matt Wells — over that stretch, first-year head coach Joey McGuire has the Red Raiders fired up. Coupled with a 33-30 win over No. 25 Houston earlier in Game 2, Texas Tech has beaten multiple nationally ranked foes in the same season for the first time since 2012.

Which is precisely the Wildcats’ mindset, as well.

“You want to let some of this momentum from Oklahoma to propel us through the season, but not let it define us or make us content,” Martinez said. “There’s so much to accomplish, and we have a really good team in Texas Tech coming on Saturday.”

K-State is tied for 22nd in the FBS in allowing just four total sacks in four games. That means that Adrian Martinez has been able to stay on his feet for a majority of his 100 passing attempts. He went all 34 passing attempts without a single sack against Oklahoma, which entered the game ranked fourth nationally with 13 total sacks.

Additionally, K-State averaged 6.5 yards on 34 rushing attempts against the Sooners. It was a tremendous display by the Wildcats’ offensive line.

“We did a really good job sustaining blocks and not falling off them,” Klieman said. “We really did a good job at the point of attack. The other thing that helped us was the amount of tempo that Collin Klein ran and we tried to go fast. We believed that they were going to wait to see what we lined up in and I think we caught them a few times. That gave us some second-and-shorts or got us a first down simply by going fast.

“(We) played really well. (We) were beat up and they were fatigued, but they weren’t going to be denied,” Klieman continued. “You weren’t going to get Hadley Panzer or Hayden Gillum out of the game. I think KT Leveston is playing so well right now. It’s fun watching him play with confidence. All of us have known KT’s ability over the last few years, but to see KT playing with such confidence and having fun playing, he’s playing at an all-conference level. Christian Duffie is pretty silent, but he’s playing really, really well. He does his job to a high, high level. Then Cooper Beebe went out and Dawson Delforge came in and did a nice job.”

Another added bonus? Deuce Vaughn has been a terrific in pass protection.

“He’s been really good,” Klieman said. “He’s worked at it as far as knowing who he has and he’s standing up and stoning some guys. He’s a really strong kid and sometimes you don’t realize how strong he is when you’re coming at him full speed. He plays with good pad level and with a good base, and he delivers a blow. That’s the big thing from pass protection is you want to deliver the blow and he’s stepped up and has made some really nice blocks to help us stay sack-free, so to speak, as well as it just gives Adrian more time when a play breaks down to go make a play with his arm or his legs.”

Texas Tech is tied for 51st with 9.0 total sacks this season.

K-State is currently averaging 70.8 plays per game and is averaging 5.56 yards per play.

Texas Tech carries a reputation for being one of the fastest-tempo offenses in the FBS, and that hasn’t changed under Joey McGuire in his first season as head coach. The Red Raiders are averaging 84.3 plays per game and 5.65 yards per play.

They ran 103 plays against Houston and 100 plays this past Saturday against Texas.

“In the past, I would’ve said that we probably had to slow it down, but for our offense to be successful, they need to be in rhythm, and the one way you get in rhythm is by getting faster,” Klieman said. “We were able to slow it down when we needed to. I think (Klein) had a great plan on when to go fast and when to slow it down, and we have to continue to mix that up. The big thing for us is whether you go fast or whether you go slow, you better convert third and fourth down. We were 10 of 19 and (Oklahoma) was 5 of 15. That resulted in us hanging onto the football nine more minutes. If you’re going fast and still moving the chains, I think it’s great.”

Klieman had many nice things to say about several defensive players who saw action against the Sooners.

“TJ Smith played well and did some really good things. TJ was coming off an injury and didn’t play in the first game and now he’s getting back and that’ll help us because he’s a good football player that’s probably going to get more reps, too, to even that out with Kobe Savage, because Kobe is playing really well, but he’s playing an awful lot. Nick Allen played some middle linebacker and weakside linebacker. Cody Stufflebean came in and played some plays, Jaylen Pickle played more plays because of Nate. My man, Uso Seumalo played a couple of big-time snaps, and he’s going to get more snaps, probably. Eli Huggins is a difference maker in there and we were excited to see what Uso could do, because he could help us.”

The Red Raiders possess the third-best passing offense (363.0) in the FBS while averaging 476.2 total yards and 36.8 points per game.

Lara was the 26th-best quarterback in the Class of 2022 by Rivals and ESPN rated him as the sixth-best overall prospect in the state of Arizona. He threw for 10,652 yards and 117 touchdowns and was a two-time all-state selection out of Desert Edge High School in Goodyear, Arizona.

“The guy that’s really helping us right now is Adryan Lara on scout team. That kid spins it around really, really well, with a lot of different wideouts that we use, and Adryan is really challenging us and it’s going to make us better when we do some spread sets because Adryan can look guys off and put the ball into tight, tight windows.”

“Hopefully we can get another four-interception game again and have many turnovers and a lot of success in this game,” safety Kobe Savage said. “I’m really excited going into this game. Hopefully I get one. I’m really excited for our defense to showcase what we can do in the secondary.”

Texas Tech wideout Myles Price had a career game against Texas with 13 receptions for 98 yards (off 17 targets), marking the most catches by a Red Raider since 2018. Price is Texas Tech’s leading receiver with 25 catches for 265 yards and two touchdowns. Overall, Texas Tech has utilized multiple pass-catchers as 16 different players have caught a pass, including eight — four wideouts, two running backs and two tight ends — who have caught a touchdown.

“It’s a big challenge every week in the passing game and we’re fortunate we have really good scout wide receivers and Adrian playing quarterback on the scouts,” Klieman said.