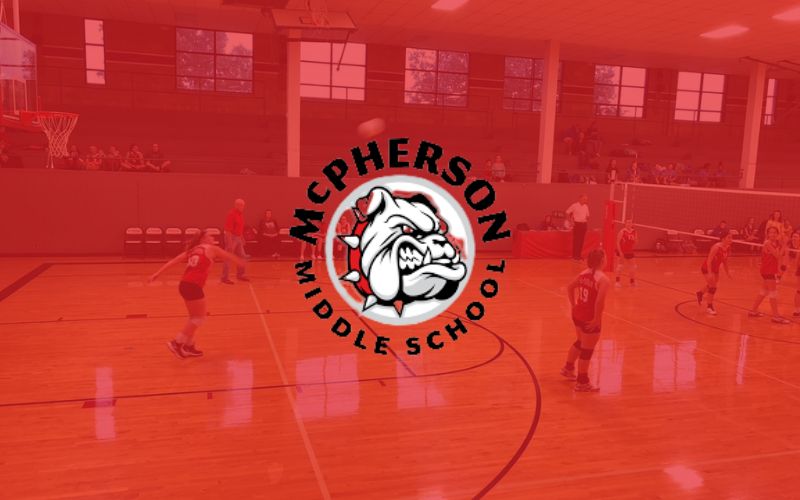 GODDARD, KAN. – The McPherson Middle School 8th grade volleyball team took on Goddard and Derby in a triangular Tuesday, winning both of their A and B games.

The A Team defeated Goddard: 22-25, 25-16, 15-12, and would then defeat Derby: 25-14, 25-14. Coach Christine Pianalto said, “The Bullpups played a couple of strong matches tonight to end their regular season play.” She said, “In the first game with Goddard, we were pretty evenly matched, trading hits and good serves. As the girls got into rhythm, we were able to put together several solid kills and blocks at the net, led by Carmin Pavlovich, Jaela Thompson, and setter Rylie Whitfield.”

Pianalto added, “Piper Alvord and Marah Kaufman played well all around the court, passing and staying strong at the net. We struggled a bit to stay up-tempo in the second match with Derby, but leadership from Kynedi Huggard and Pera Bauer kept the girls focused through the finish.”

Following the wins, the Pups end the regular season with an overall record of 17-4-1. The 8th A team will play in their league tournament in Newton on Saturday.

The B Team defeated Goddard 25-15, 18-25, 15-12, then defeated Derby: 25-23, 26-24, concluding the season 5-17-1. Coach Tami Malm noted, “We entered both of our matches more relaxed tonight against a couple of good teams. Against Goddard, our serving was the best it’s been all year, and the girls were on their toes and communicated well. Malm said, “We lost our focus in the second set but came together in the 3rd set to pull out the win.”

The match with Derby was a nail biter and Malm added, “Brynn Littlejohn had a long string of serves that Derby could not return. At times we were caught flat footed but adjusted well and I felt our girls just wanted it more.” Coach Malm concluded by saying, “I am pleased with how they came together and finished their season strong.”

The 7th Graders traveled to Derby for a triangular with Derby and Goddard. The A Team opened by defeating Derby 25-10, 25-23, and would later defeat Goddard 25-14, 25-11. “Lots of positives tonight!” Began Coach Shelley Bohme, adding, “We served well in both of our first sets, and had several girls get some serving runs in both matches.  We overcame being down 6-13 in Set 2 against Derby with some great hustle and teamwork. Our hitting was probably the best it has been all season, helped by great passes and setting.”

Following the two wins, the Pups move to 15-5-1 on the season, and the A team will play in their league tournament at the Roundhouse at McPherson High School on Monday.

Following the last B team game of the season they end with an overall record of 11-13.Coach  Katherine Cooper said, “I think the girls did very well. They played hard and were determined to get a win. Against Goddard, the girls were able to get 17 aces, which boosted their morale and helped them get the win. The girls were able to get several tips throughout the night. They made quick decisions which helped them save the ball and get points.” Cooper concluded by saying, “Throughout the season, the girls have grown significantly as players and teammates.”