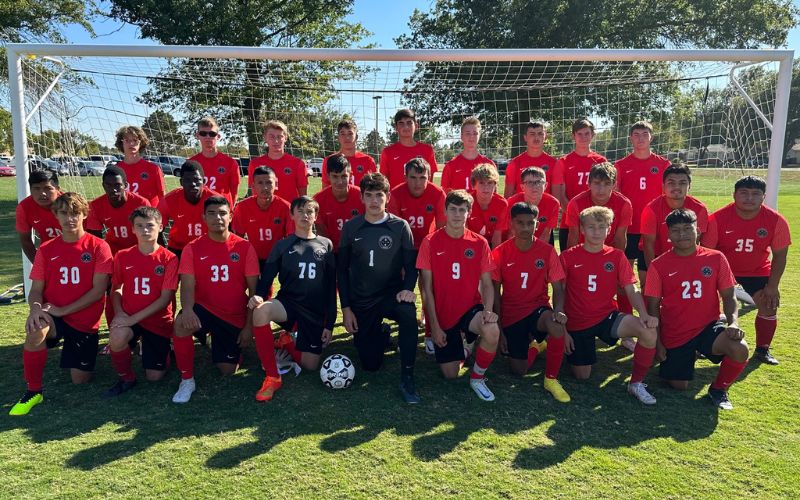 DE SOTO, Kan. – This season, will be one that McPherson Boys Head Soccer Coach Chris Adrian and his team will remember for a long time. The Bullpups were 2-9 entering the final month of the regular season, before winning 7 of their next 10 matches, including two wins over 6A Junction City,  two wins against No. 4 Augusta, and collecting another upset win over top-seeded Buhler to advance to the Class 4-1A State Semifinals, where they would take on Baldwin High School.

In Friday’s Semifinal, the Pups battled through the toughest weather conditions that they had faced all season, and after finding themselves trailing 1-0, Coach Adrian said, “The team didn’t panic, they remained focused and were the better team in the first half.”

Hayden Hoxie would tie the match before the break on a penalty kick, but unfortunately, goalkeeper Josh Wehrman was injured making a 1-on-1 save. “Trenton Moll stepped in and did a fantastic job not just Friday but also Saturday,” said Adrian.

In the second half, McPherson would play into the wind, making it extremely difficult to get the ball forward as Baldwin applied constant pressure. “Our defense stood strong and kept Baldwin from getting any really good looks on goal,” said Adrian, but with less than a minute left, Baldwin was given a penalty kick on a hand-ball, putting the game away to defeat the Pups 2-1 in the semifinals.

“After a really difficult result Friday night, I cannot express how proud I am of the way the team came out and played Saturday.” said Coach Adrian, who added, “Third-place games are extremely difficult, and these kids once again proved there is no quit in their DNA.”

It was an even game in the first half with both goalies making key saves, and with 5 minutes to go in the first half, Jovanny Ontiveros came into the game, and on one of his first touches, he was able to get behind the Wichita Trinity defense to get the Pups on the board, collecting his first goal of the season. “What a time to get it,” said Adrian.

The second half grew physical, and more fouls were being called. Wichita Trinity was able to connect on a free kick to tie the game, then with 9 minutes left they would take the lead, but the Bullpups had one final chapter to finish in their memorable season. “Just like these Pups have done all postseason long, they believed in themselves and produced a remarkable comeback.

With less than a minute left in the game, the team worked the ball up the sideline and played a pass to Hayden Hoxie, who was fouled in the box. He calmly stepped up and buried the penalty kick in the bottom corner to send the game into overtime. “The boys had all the momentum going into overtime, and quickly earned a corner kick,” explained Coach Adrian, and in overtime, it was Hunter Mendez, who got to the ball first from Hoxie’s corner kick, and headed in the game-winning goal, as the Bullpups would win 3-2.

“It’s hard to describe what an amazing run this team went on for the last month of the season.” said Coach Adrian, “They have faced so much adversity and have shown that anything is possible with determination and belief.” He concluded by saying, “The support of our fans and community has also been incredible and made a huge difference when this team was going through difficult results. These seniors and this team are special and will always be remembered for what they were able to accomplish against all the odds.”