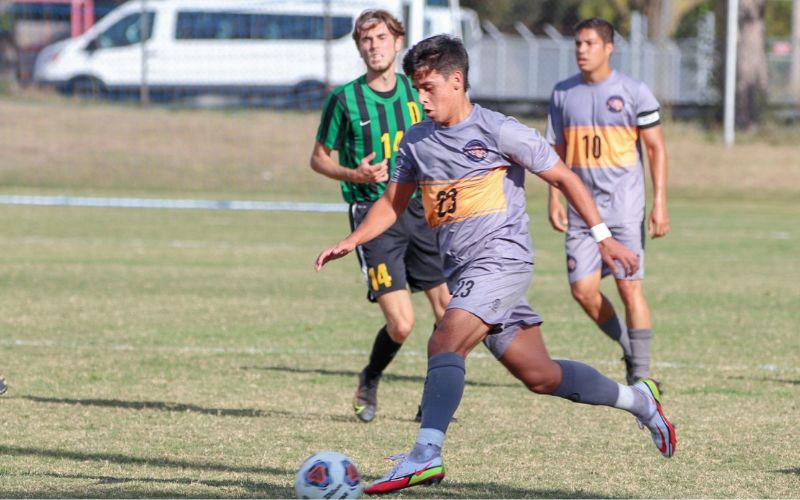 MCPHERSON, Kan. (CCCTigers.com) – The Central Christian College men’s soccer team bounced back from their disappointing loss two nights ago to defeat Kansas Christian College at home, 6-0. The Tigers were firing on all cylinders against the Falcons, scoring a trio of goals in both halves.

Coach Hoxie elected to mix up his line-up, giving a few of the guys that normally come off the bench, their first look at the starting lineup. One of those players was freshman Jeremy McClain, who recorded his first career hat trick, scoring the Tigers’ first three goals of the game. His first came in the 2nd minute of the game when he took the ball off the foot of one of the Falcon defenders, took a couple of dribbles, then beat the keeper far post with a missile into the side netting. His second came in the 21st minute assisted by Carlos Arias and Logan Singh, and his third two minutes later on an assist from Ayobami Onifade.

In the second half, McClain let some of his teammates share in his glory. Nick Aranare put the Tigers up 4-0 ten minutes into the frame on another assist from Arias. Drew Schrader got in on the action in the 69th minute on an assist from Johnny Rodriguez, and the 6th and final goal came off the foot of Mattia Cola, on Schrader’s assist.

The Tigers controlled the time of possession, and made the Falcons, who definitely have some talented player, look slow. The Tigers also dominated the shot chart, out shooting the visitors 24 to 7, and placed 13 shots on frame, to just two for the Falcons. Sebastian Herrera picked up the win and the clean sheet in between the pipes for the Tigers. He faced just two shots on goal, saving them both.

Coach Hoxie was pleased with the way his team responded after the tough loss on Wednesday, saying, “That was a fun game to be a part of. I thought we played really well at times. It was good to have some guys all going in the net before the conference run in. Now that we are half way over, it’s time to test our nerve against the best.”

The win pushes the Tigers to 5-1-2 overall on the season. They will open up SAC play next week, at home on Wednesday against Southwestern Christian University. Kick-off is slated for 5:30 pm.