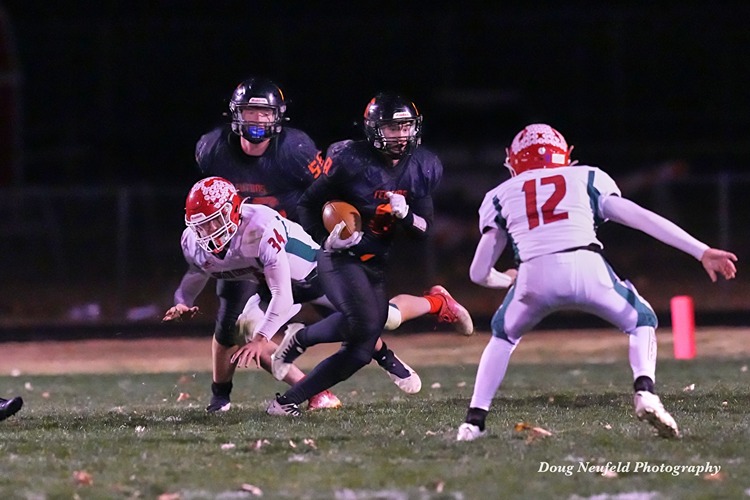 HUTCHINSON, Kan. – It was bone-chilling cold on Friday at most high school football games across the state. Next Friday could be colder.

But that isn’t putting a damper on the excitement, as we’ve reached the state semifinals across all nine classifications, and there are plenty of good storylines remaining for area teams.

Here are five storylines to watch unfold next week.

Someone will make history in 4A

On the western side of Class 4A, someone will make history by being a first-time finalist. Unheralded and top-seeded Wamego (11-0) will welcome a 10-1 McPherson team that is a playoff regular.

Neither team has ever played for a state football championship.

Wamego is a two-time semifinalist and has reached the semis for the first time since 1975. McPherson has reached its seventh semifinal. The Bullpups have been a semifinal regular lately, having reached this stage in 2017, 2018, 2019 and 2020.

The odds will be long for the winner in the state championship game in Topeka, as waiting for the winner will be powerful Bishop Miege or St. Thomas Aquinas. Still, the prospect of being a first-time finalist for Wamego or McPherson makes this a game you can’t turn away from.

Speaking of McPherson, you don’t have to stay in the county seat to catch a team still playing. In Class 1A, Inman is looking for another trip to Hays for the state championship game, but the Teutons have a tall task, having to beat a Conway Springs team that has won seven in a row. Included in that win streak is a 35-14 win at Inman. The Teutons, however, are healthier now and playing as well as they have all season.

Just to the east of McPherson is that eight-man juggernaut, Canton-Galva. The Eagles have been one of the favorites in Eight-man Division 2, and nobody has played a full game against them since the season-opening 66-36 win over Little River. They’ll play fellow 11-0 Axtell on Friday in what should be an epic battle on the road.

The matchup we all wanted in 2A is happening

Southeast of Saline has been the prohibitive favorite in Class 2A. Here’s all you need to know about the Trojans. They gave 3A power Andale its toughest game last season.

Waiting for the Trojans on Friday is fellow 11-0 Kingman. The Eagles couldn’t wait for revenge in the quarterfinals against Beloit, which ended Kingman’s season last season in the semifinals. Kingman, despite turning the ball over four times, won going away 35-6.

Kingman also had some quality wins over Cheney, Conway Springs and Ellsworth. The defense has been rock solid, not allowing more than 14 points in any game this season, and more than seven points once. They’ll get their toughest challenge of the season Friday.

Cunningham is right on track

Cunningham will take on another undefeated team in the semifinals in Waverly. The Cunningham defense, however, makes you feel like the Wildcats are in good shape. They have allowed 61 points all season and just 31 in the last nine games. In the wild world of six-man football, that’s incredible.

What else needs to be said about Andale?

It seems every postseason, you try to sell yourself that Andale’s opponent each week could have a chance to be in the game. And it seems more often than not, that opponent gets their teeth kicked in by the Andale Express. After Friday’s 48-0 smashing of a good Rock Creek team in the quarterfinals, it’s fair to wonder how long this winning streak will go. Now at 49 games, the Indians have again an opponent that you might think can challenge them.

It wouldn’t be surprising, but it would be less surprising to see Andale pulverize another outstanding opponent.