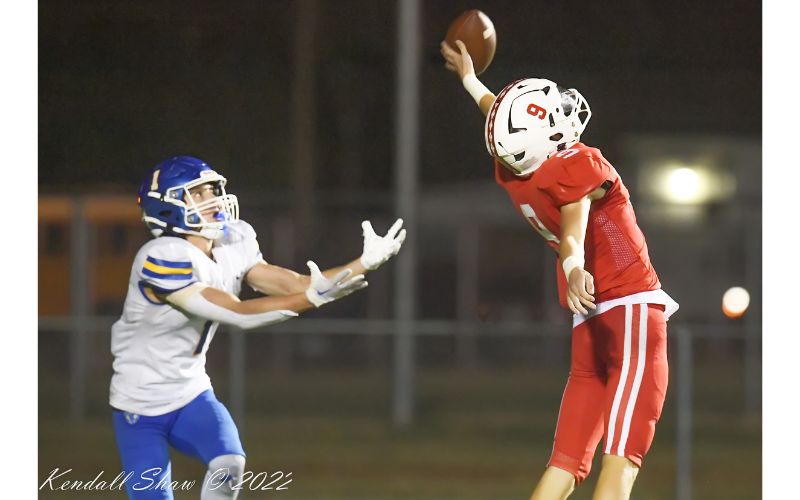 WINFIELD, Kan. – It was a shutout performance on the road from the Bullpup defense Friday night, as they would defeat the Winfield Vikings 24-0.

The Pups would force the Vikings to punt after their first three plays, and the Bullpup offense would quickly march down the field for a touchdown, as Hunter Alvord found Blaise Hoover for a 16-yard pass and catch.

MHS looked like they were on their way to a dominant performance when later in the half, Tucker Pelnar broke past the secondary, and Alvord found him on a 43-yard touchdown strike. Blaise Hoover would add a field goal before the half to give McPherson a 17-0 lead. The Pups would score on their opening drive of the second half, as Jaytin Gumm would find the end zone on a 5-yard touchdown scamper.

After a 24-0 lead, the Bullpup offense came to a half. After only one penalty in the first half, the Pups would end the night with eight. Head Coach Jace Pavlocich said, “I’ll be honest with you, that wasn’t our finest hour offensively tonight.” He added, “We were playing slow and not real physical consistently.” He later mentioned the lack of focus in Thursday’s practice leading to one of the worst practices of the season, and that practice was a reflection in Friday’s game.

“From here on out you throw records out of the window. We’ve got to refocus, and, I think more of it needs to rely on ourselves, get better for ourselves, being more physical and more consistent, and that comes down to practice.” Pavlovich concluded by saying, “If we sure things up in practice, we’ll feel a lot better about next week. I wish we would’ve played a little bit better, but a win is a win, and we’re not going to be too greedy about that, we’ll take it, be happy about it, and learn a lot tomorrow morning.”

Following the win, the Bullpups move to 4-1 overall, and they will be back on the road next Friday, in Wellington. Kick off is slated for 7 p.m.

Weather Not a Problem For the Bullpups, Shutting Out Ark City 35-0