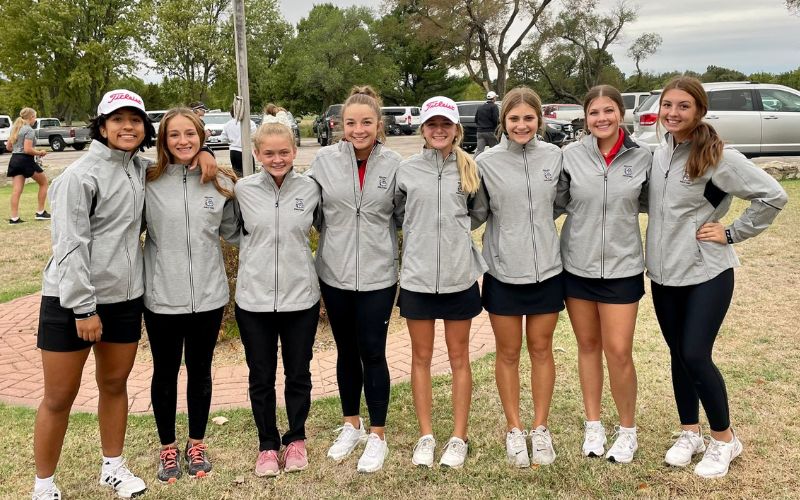 EL DORADO, Kan. – The McPherson High Girls Golf team finished a season-best second place Thursday, as they took on eight other teams at Prairie Trails Golf Course, in a tournament hosted by Circle.

Head Coach Treg Fawl said, “We were able to take 8 of our players to this event. We had 6 players on our varsity roster and 2 individuals.” The Pups were led by Brodie Kuhn, who tied for third shooting 46, and just four shots back was Andi Buschbom, who finished 8th. Amber Smith and Reese Elliott tied for 10th shooting 52, and one shot back was Kaya Lowery who tied for 13th. Jordan Vanderhoof, and Macy Rinker shot scores of 56, and 57, and Olivia Cheatham finished with a score of 62.

Coach Fawl added, “We are getting to the point of the season where it is getting very competitive to see who will make the top 6 by the end of the season. We have so many girls that are so close, it makes it tough.” He concluded by saying, “I am very happy with our performance from yesterday. Our girls will continue to improve in areas of their game to post lower scores.”

The Pups had a team of 6, compete at the JV 3-person scramble tournament in Hutchinson, as the team of; Kyla Lang, Carly Schroeder, and Landree Wedel took first, while the team of; Paisley VanCampen, Hattie Terblanche, And Elizabeth Banuelos took fifth.

The Bullpups will have a quick turnaround, and will be in action Friday morning in Hesston, for a meet hosted by Buhler. Tee time is scheduled for 9 a.m.

Below are the Results from the Circle Varsity Invitational: