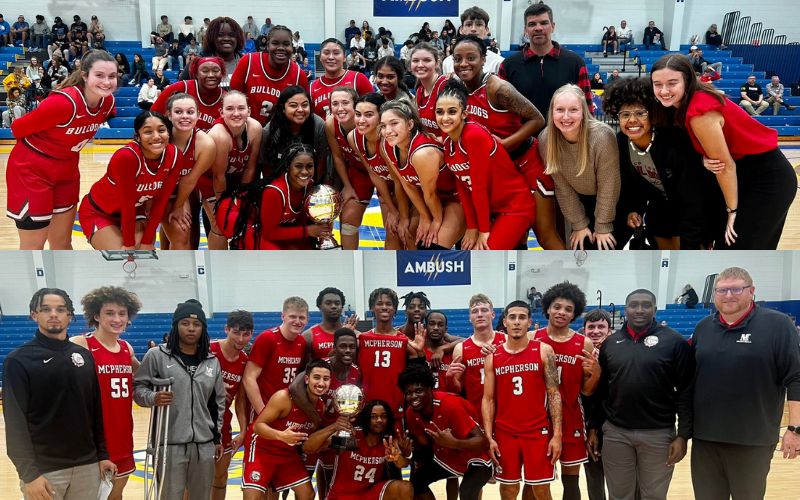 The Bulldogs were led by Dy’mond McElrath, who had 16 points, 7 rebounds, and 5 assists on the night. Mac moves to 2-0. They will return to action Friday and Saturday, hosting Northern New Mexico College at 6 pm and Haskell Indian Nations University at 4 pm on Saturday.

For the Tigers, Briasia Garza led with 9 points, 10 steals, and 7 rebounds. Central falls to 0-2. They will play in the Tabor Classic Friday and Saturday, playing Bellevue University in Hillsboro at 2 pm, and Tabor College at 3 pm on Saturday.

In the Men’s Game, 4 Bulldogs found themselves scoring in double-figures, led by Owen Braxmeyer, who had 21 points and 9 rebounds.

Christian Aguillard was an efficient 6 of 9 for the Bulldogs finishing with 13 points and 10 rebounds for the double-double.

The Tigers were led by Isaiah Rivera who had 21 points 9 assists and 6 rebounds,

The men’s game also favored the Bulldogs, as they put together a 24-7 run just over midway through the half, and would go into the break leading 47-21. They eventually won, 85-65.

The Bulldogs move to 3-0 on the season, and they will host Clarke University and Benedictine College on Friday at 8 pm and Saturday at 6 pm.

The Tigers fall to 2-2 overall and they will return to action Friday, as they’ll travel to Manhattan to take on Manhattan Christian, with tipoff set for 7:30.

Kansas Suspends Self for 4 Games in Ongoing Infractions Case

The Bulldogs Dominate the Coyotes on Senior Night