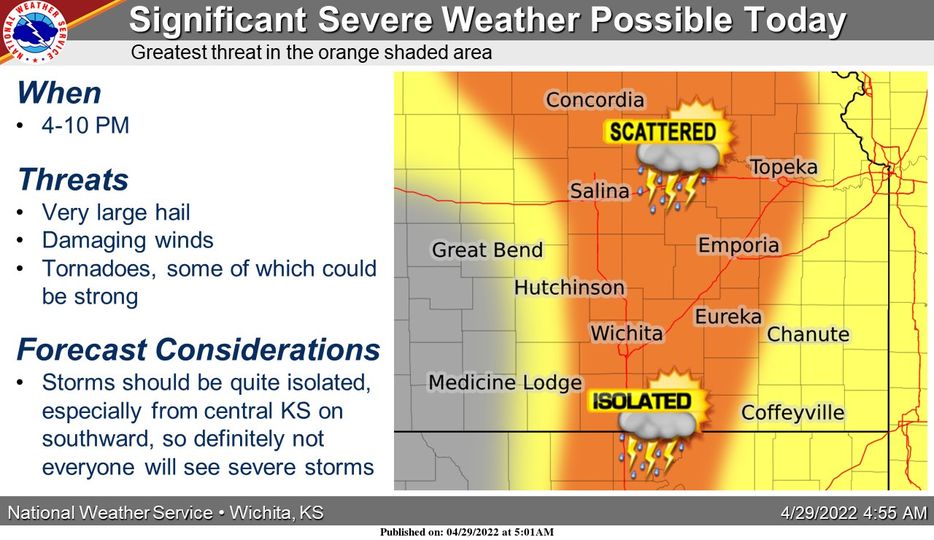 NWS
– With severe storms are possible late Friday afternoon-evening, now is a good time to review your weather safety plans!


﻿
While activity will likely remain quite isolated from central Kansas on southward, and thus not everyone will see severe weather, any storm that forms will be capable of significant severe weather, including tornadoes.


By mid-late evening, storms should form more of a line from generally I-135 on eastward, with the significant severe weather threat gradually diminishing.


Strong south winds will continue Friday. A Wind Advisory has been issued for Saline, McPherson, Reno, Kingman and Harper Counties from 1 p.m. to 10 p.m. Winds gusts up to 45 mph are expected.

Friday
A 20 percent chance of showers and thunderstorms after 3pm. Some of the storms could be severe. Mostly sunny, with a high near 89. Breezy, with a south wind 23 to 29 mph, with gusts as high as 41 mph.


Friday Night
A 40 percent chance of showers and thunderstorms, mainly before 11pm. Some of the storms could be severe. Partly cloudy, with a low around 53. Breezy, with a south southwest wind 14 to 22 mph becoming northwest in the evening. Winds could gust as high as 33 mph.


Sunday
Sunny, with a high near 75. Light and variable wind becoming south southeast 5 to 9 mph in the morning. Winds could gust as high as 18 mph.


Sunday Night
A slight chance of showers and thunderstorms, then showers likely and possibly a thunderstorm after 1am. Mostly cloudy, with a low around 53. Chance of precipitation is 60%.

Monday
Showers and possibly a thunderstorm. High near 72. Chance of precipitation is 80%.