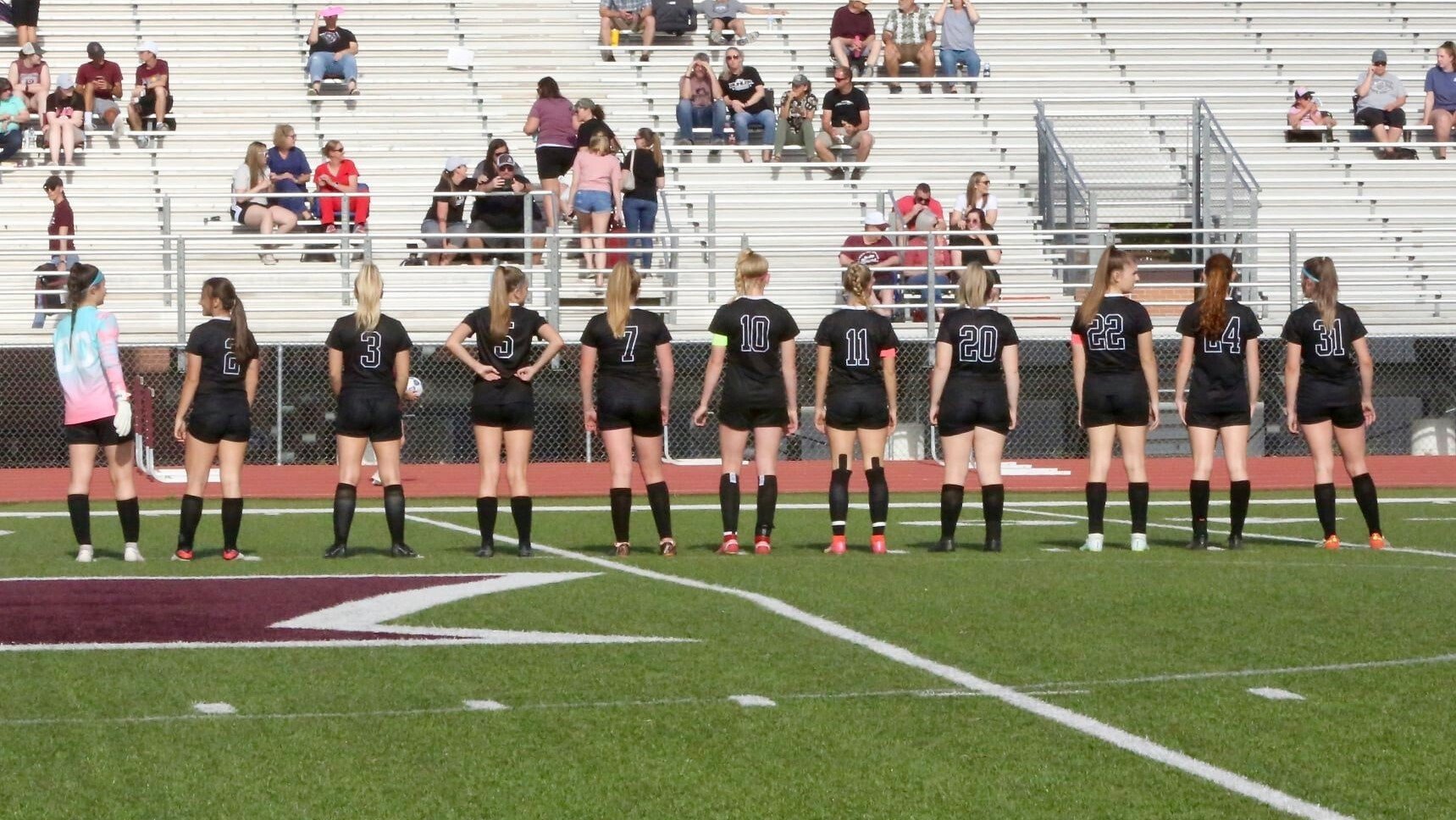 Buhler girls soccer starters are introduced before a regional playoff match with Wichita Independent on May 16, 2022. (Photo Credit: Bob Hunter)

BUHLER – When the month started, the Buhler girls soccer team was in the midst of a rugged stretch.

The Crusaders’ 4-2 loss to McPherson on May 3 was their second in a row, and it capped a stretch of four games without a win. The loss also dropped their record to 5-7-1.

But the schedule was about to soften, the Crusaders were getting healthier, and all of a sudden, they caught fire at the right time.

Buhler will take on Topeka’s Cair Paravel Latin School, a private 1A high school, at 5 p.m. Friday at Hummer Sports Park in Topeka in the Class 4-3-2-1A state semifinals. It’s the second time in the last three seasons played – 2020 was canceled due to the COVID-19 pandemic – that Buhler has reached the state semifinals.

Here are three thoughts on Buhler’s season and journey to the state semifinals.

Coach Randall Rank is proving to be not just a good tactical coach, but also a big-picture coach

It’s hard when things aren’t going well. Buhler lost to its biggest rivals this season, Hutchinson 2-1 and McPherson 4-2, and both games were at Buhler. The Crusaders also struggled in losses to Augusta (2-1) and Mulvane (4-0).

And yet, Rank never wavered from the big picture – that when Buhler got healthy, that once the inexperienced players jelled with the experienced ones, Buhler would be a contender.

In May of last year, Tanksley’s season ended with a torn ACL against McPherson.

It was a crushing blow to Buhler’s state-championship hopes without the magic and wizardry Tanksley brings. So few soccer players have the combination of skill, speed, vision and ability to score like Tanksley does.

Her status for this season was in question, however. Was her surgically-repaired knee going to be healthy? Would she be better off sitting out the season to get ready for the fall season at Weber State? And would she trust her knee if she did play?

It wasn’t smooth at first for Tanksley, but as the season wore on, she became that same old magician.

As Buhler prepared for postseason, Tanksley moved to forward, and that has proven to be the correct move as Tanksley scored both goals in Tuesday’s quarterfinal win at Mulvane.

Can Buhler (or McPherson for that matter) make history?

Non-Kansas City and non-Topeka schools do not have a good history at girls state soccer. Wichita Trinity (4-3-2-1A, 2014) is the only school outside the Kansas City and Topeka areas to win a state championship in girls soccer.

Buhler is peaking and should like its matchup with Cair Paravel, a 1A school that has won 14 of 15. Cair Paravel’s quarterfinal win, however, was impressive as it beat Topeka Hayden 2-1 after losing to Hayden earlier this season.

McPherson and Bishop Miege will square off in the other semifinal. The two powers met earlier this season in McPherson, with Miege surviving a late shot off the post to win 2-1.

It’s not farfetched to envision a McPherson-Buhler championship game, which would be the second time ever a soccer state championship game – boys or girls – would be contested between two non-metropolitan area schools. The first also involved Buhler in 2007, when the Crusader boys fell 2-1 in overtime to Independence.