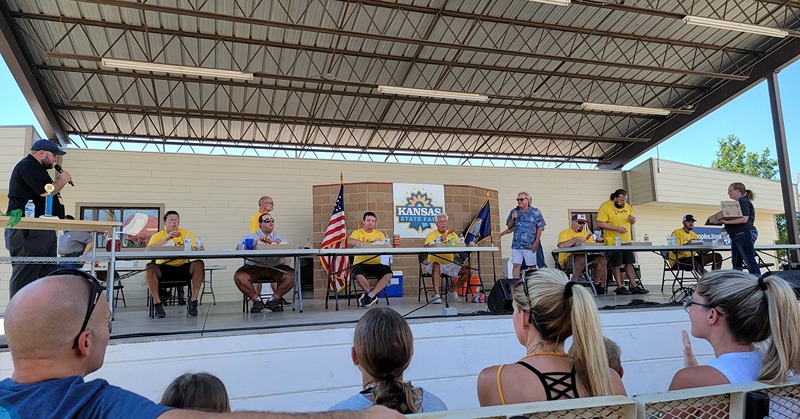 HUTCHINSON, Kan. – What at this point appears to be a very successful 2022 Kansas State Fair concluded Sunday evening with the first racing event on the Nex-Tech Grandstand’s historic dirt track in 20 years.

Saturday alone, over $221,000 in ticket sales were reported at the gates, and through Friday the carnival had done over one million dollars in sales. Ticket sales from Grandstand shows topped $1.8 million.

Friday night’s Tech N9ne/Blaine Howard show had a paid attendance of around 2,300, and around 3,600 attended the T. I./Clingy show Saturday night.

Preliminary numbers from the fair are expected to be available in the middle of this week, with final numbers possibly ready in time for the next Kansas State Fair Board meeting on Oct 11, when the board will take up the budget for the next fiscal year.

Saturday’s Woodcarving Auction saw two carvings bring bids of over $2,000 dollars. One special item during that auction brought as much and then more. A quilt donated by Laura Martens of Elkhart brought a more than $2,000 dollar bid, which was matched by Fair Board member Dylan Evans of Lebo. Money raised from the quilt sale is being donated to the Jones Family in Nickerson.

Evans is the owner and operations director of Wheat State Elite, the summer basketball program Ava Jones is part of.

On Sunday, Michael Hill defended his title in the fair’s Pronto Pup Eating Contest. Hill, a former football coach at Haven High School, said his wife had entered him as a joke in the 2021 contest and figured he could eat a couple of Pronto Pups and get a t-shirt out of the deal.

In the 2022 contest, Hill consumed eight Pronto Pups in the allotted 10 minutes, tying the 2019 mark set by Chad Harris, who was on hand for the event. Hill told Ad Astra News he thought that would be the mark to beat for quite some time.