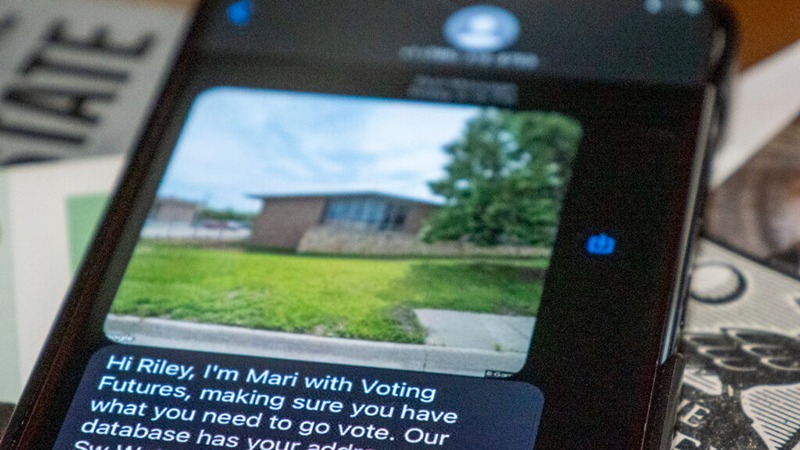 Registered voters in Kansas received text messages that appear to be sent by “Mari with Voting Futures” and encourage them to vote. But the messages direct voters to incorrect polling sites. (Sherman Smith/Kansas Reflector)

TOPEKA, Kan. — Kansas Secretary of State Scott Schwab warned voters Monday not to be fooled by text messages directing them to the wrong polling location.

The unsolicited text messages, which arrived Sunday night and appeared to target Democrats and unaffiliated voters, mirror similar misinformation campaigns in other states.

Numerous images shared with Kansas Reflector and on social media show registered voters received text messages that identified their home address, which was correct, and the address of their supposed voting location, which was incorrect. The text was accompanied by an image of the incorrect polling location.

The messages claim to be from Mari with an organization called Voting Futures. A variant identified Black Voters Matter as the source. It wasn’t immediately clear who really sent the texts.

“These texts are designed to spread false information and create confusion for registered voters,” said Deann Mitchell, chairwoman of the Johnson County Democrats. “Any attempts to disenfranchise voters is an attack on the election process.”

Earlier this month, KGW-TV and other news outlets reported on a similar text message campaign in Oregon. There, the texts were sent by “Myra” from Voting Futures, with a variant from Voto Latino. KSG-TV identified Movement Labs as the sender of the Oregon texts.

Movement Labs, which claims on its website to “leverage technology and our army of passionate, remote volunteers to build power for progressives and marginalized communities,” didn’t immediately respond to a request to comment for this story.

A text message sent Tuesday afternoon appeared to be from Movement Labs and said the organization was “deeply sorry for any confusion we caused.” The new message directed voters to the Secretary of State website to find accurate information about their polling place.

Voto Latino in a statement Monday said it sent unintentionally confusing text messages to voters in Kansas, New Jersey, Illinois, North Carolina and Virginia to encourage them to vote, and that it sent corrected follow-up text messages.

Esmie Tseng, a spokeswoman for the American Civil Liberties Union of Kansas, said the ACLU election hotline, 866-OUR-VOTE (866-687-8683), had fielded calls about the misleading text messages.

Tseng said it was concerning that certain voters appeared to be targeted over others. The text messages were a good reminder that voters should go to trusted sources for information about how to vote.

“It’s already hard enough for voters to figure out how they want to vote according to their values and beliefs and with the different amendments and candidates,” Tseng said. “Making it harder to vote this way is just a little bit much, and I’d hate for a voter to go somewhere and it’s the wrong place.”

Nov. 1 is the deadline to apply for an advanced mail ballot, which has to be postmarked by Nov. 8 and delivered to the county election office by Nov. 11.

The deadline to register to vote in the general election was Oct. 18.