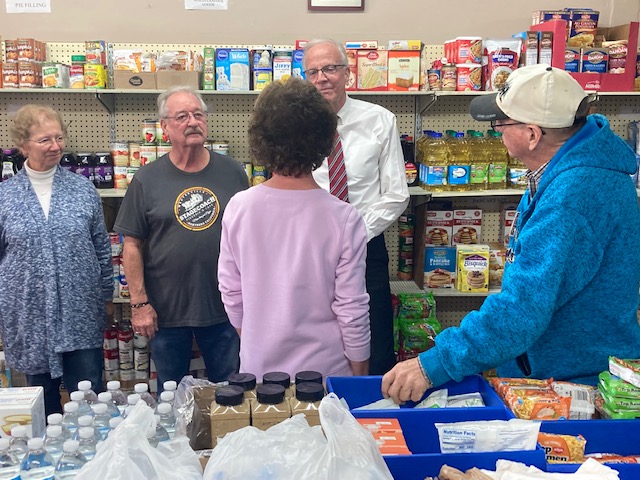 HUTCHINSON, Kan. – Thanksgiving is a time to remember what we are thankful for and to remember those who are less fortunate. While on a Thanksgiving break from Washington, US Senator Jerry Moran came to Lyons Tuesday afternoon to help package food for the Northern Rice County Food Bank.

“Today’s cost of living, inflation, the cost of gas, those things have a consequence for people on fixed incomes and low incomes, and we work hard in Washington to make sure that the programs the federal government is involved with are helpful to people are hungry,” Moran said. “The real work takes place at the food bank, where hundreds of people can access food.”

Food Bank volunteers told Moran Tuesday was a slow day for them, with 15 families coming in to receive help in preparing their Thanksgiving dinner.

In Washington, Senator Moran chairs the Senate Hunger Caucus, a bipartisan group of senators that come together to work on hunger issues. His interest in this stems from the work of the late Senator Bob Dole and his efforts to address hunger both at home and internationally.

The hunger crisis is particularly acute around the world right now due to a variety of factors including the war in Ukraine. “Ukraine and that part of Russia is the breadbasket of that part of the world, just like Kansas here in the United States,” Moran said.

The senator pointed out that the number of famines in need is increasing.