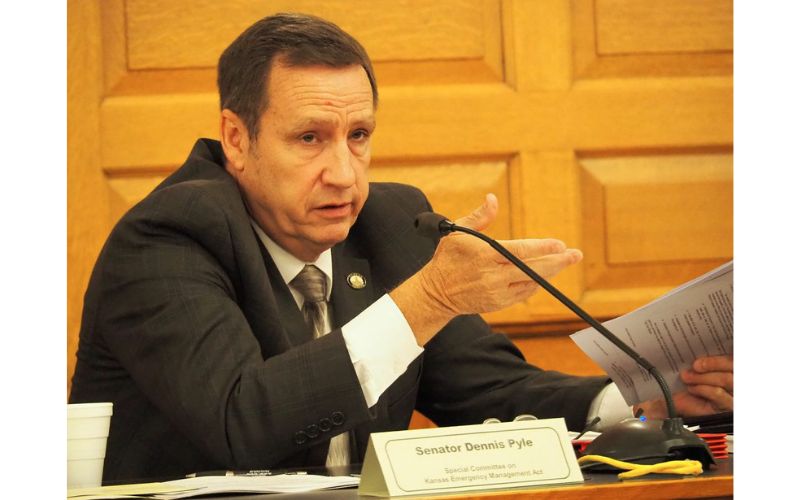 Pyle, a Hiawatha farmer among the Senate’s conservative members, said he submitted documents Monday night to initiate the campaign. Pyle and running mate Kathleen Garrison of Haysville would need 5,000 petition signatures to be on the November general election ballot.

“I am a God-loving American, devoted to the Constitution and protecting our children, and I am entering this race to give Kansans a choice,” Pyle said.

In addition to Schmidt, the Republican Party’s primary for governor includes Arlyn Briggs of Kincaid. Kelly is seeking reelection to a second term against Emmett resident Richard Karnowski, a Democrat. The Libertarian Party’s gubernatorial candidate is Seth Cordell of Lyons.

Pyle, 61, has served as a Republican in the Kansas Legislature for nearly 20 years. He was in the Kansas House from 2001 to 2003, but lost a race for reelection. He assuming a seat in the Kansas Senate in 2005. In 2020, he easily won reelection to his northeast Kansas seat in the Senate with more than 70% of the vote.

During the 2022 legislative session, Pyle was among Republican senators stripped of committee assignments for refusing to vote for the congressional redistricting map supported by Senate President Ty Masterson, R-Andover.

Kansas Democratic Party spokesperson Emma O’Brien said the Pyle candidacy was a sign some Kansas Republicans were uneasy with the Schmidt campaign for governor.

“As Republicans flock to support Gov. Laura Kelly because of her track record as a fiscally responsible and unifying leader, Schmidt continues to have problems with his own party,” O’Brien said.

O’Brien pointed to Schmidt’s selection of “an unknown political operative” to be his running mate. Schmidt’s choice for lieutenant governor was Katy Sawyer, who for years has worked in constituent services for U.S. Sen. Roger Marshall. O’Brien also said Pyle’s independent candidacy indicated “no confidence in Schmidt’s ability to be Kansas’ next governor.”

C.J. Grover, the campaign manager for Schmidt, said Pyle was a “fake conservative” engaged in a “vanity” campaign for governor.

“Dennis Pyle is a fake conservative who just wants attention,” Grover said. “He stood with pro-abortion legislators to nearly derail the Value Them Both amendment. He sided with Laura Kelly, Hillary Clinton’s lawyers and the ACLU against our Republican majority in the Legislature on redistricting maps. Now, he’s trying to help Laura Kelly and Joe Biden again with a vanity run for governor.”

Shannon Pahls, executive director of the Kansas Republican Party, said a vote for Pyle could be viewed as a vote for Kelly because it would draw votes from Schmidt.

The Republican Party’s primary for governor would have taken on a different feel if former Gov. Jeff Colyer, who for seven years was lieutenant governor to Gov. Sam Brownback, hadn’t dropped out of the 2022 race for health reasons.

In 2018, Pyle entered a crowded GOP field in an attempt to replace retiring U.S. Rep. Lynn Jenkins. He finished fifth in the 2nd District’s Republican primary won by Steve Watkins, who served one term before ousted by U.S. Rep. Jake LaTurner.

In announcing his congressional candidacy four years ago, Pyle said “no matter how crowded the field, there is always room for a genuine, proven conservative who represents rural Kansas values.”

Pyle also challenged Jenkins in the Republican congressional primary in 2010. He lost to Jenkins, but earned about 43% of the vote.