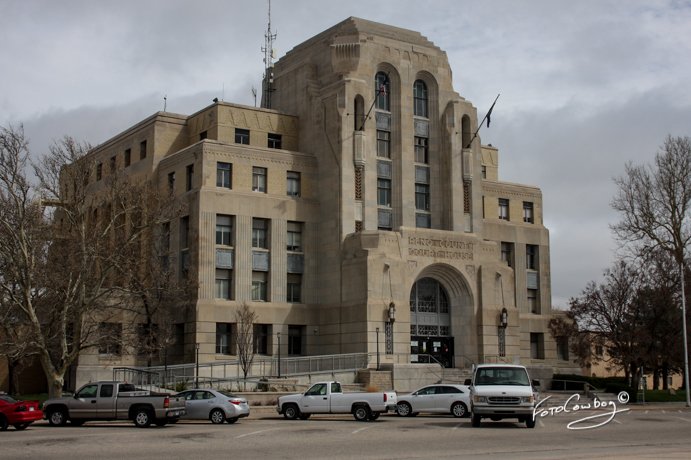 HUTCHINSON – What to do, if anything, about anchoring the stone facade to the dome of the Reno County Courthouse, was back before the Reno County Commission Tuesday. That there are different viewpoints on this is still an issue.

Maintenance Director Harlan Depew shared what an engineering firm brought in by the county’s insurance carrier had to say about anchoring stones loosened during earthquakes a few years back. Their opinion is that nothing needs to be done.

Local engineer Brent Engelland said that WJE was asked to determine two things, whether the damage was directly attributed to a 2019 earthquake and do building codes require that repair. Engelland said what it does not address is an investment or future longevity. His contention centers on the fact anchoring present when the courthouse was built in the late 1920s is no longer there.

Commissioner Ron Sellers said while he sees the views of both engineers, he thinks the County can wait to address the anchoring issue, and when the time comes solicit competitive bids for that work. Sellers made it clear he will not support any further work by Phishny Restoration, citing the time they have been working on courthouse projects. Commissioners were of a general consensus to not take any action at this time… there is funding set aside for any work the county decides to do in 2023.

Commissioners adopted a resolution of intent to exceed the revenue-neutral rate for the county’s proposed 2023 budget property tax rate. The County’s proposed levy would be slightly below the 2022 rate. County Administrator Randy Partington said about $1.3 million would have to be cut from the budget to meet the RNR, equating to about a two-mill rate cut. A similar resolution was adopted for most of the special districts commissioners serve as the governing board of, such as rural fire districts.

An emergency repair project on the 4th Avenue Bridge over the Cow Creek diversion just west of Hutchinson was approved. The west abutment back wall at the bridge had been delaminated over its height and an expansion device was broken. The contract with PCI Roads carries a cost of just over $218 thousand. Their bid was $1,460 above the other bid received from four solicitations.