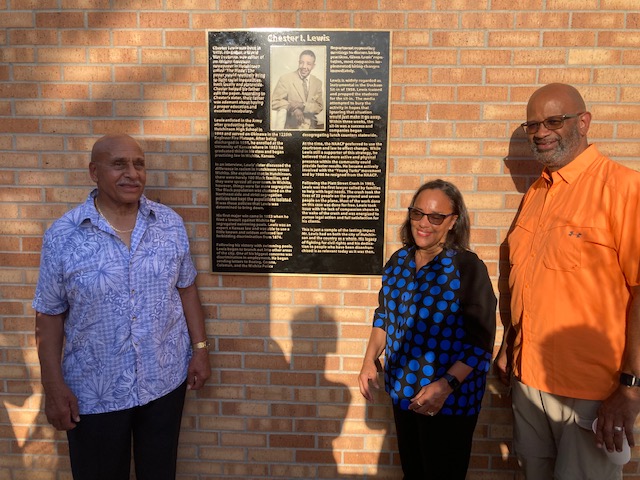 HUTCHINSON, Kan. – A plaque honoring the legacy of Kansas civil rights leader and Hutchinson Native Chester I. Lewis was dedicated Friday night in the downtown Hutchinson Plaza that now bears his name.

Lewis’s daughter, Brenda Davis, and other family members were on hand for the dedication, and she touched on some of the little-known things about her father, including that he was a pilot. She shared a story about some airports refusing to serve him or even fuel his plane because he was black and how others responded.

Lewis was born and raised in Hutchinson. At the family home, his parents published an early black newspaper, the Kansas Blade. He made his mark as an attorney in desegregating businesses, restaurants, and other places, and is perhaps best known for training and organizing the students who took part in the 1958 Dockum Drug lunch counter sit-in in Wichita.

Davis said this kind of recognition would overwhelm her father, and that he would be grateful for the honor, as is his family.

Among other speakers during the program were Hutchinson City Councilman Greg Fast, who read a proclamation declaring Friday as Chester I. Lewis Day, Rebecca Yoder Stettler from Hutch in Harmony, Hutchinson NAACP chapter president Calvin Wright, and his predecessor Darrell Pope.

“It’s fabulous we get to see the celebration of a black man who contributed so much to our community,” Wright said.