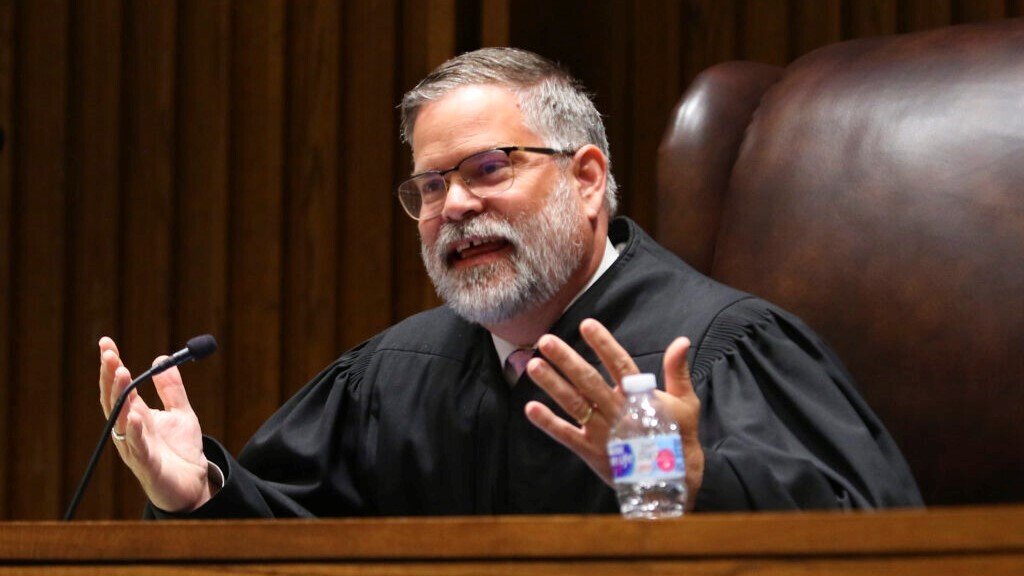 In a decision from the Kansas Supreme Court, Justice Caleb Stegall affirmed the constitutionality Wednesday of the newly drawn boundaries for state House and Senate districts. (Thad Allton for Kansas Reflector)

TOPEKA
— The Kansas Supreme Court affirmed the validity Wednesday of the newly drawn boundaries for state House and Senate districts.

. The state constitution requires this petition to be filed within 15 days of map publication in the Kansas register and gives the court 30 days to consider the matter from the time of filing.

Opponents of the maps raised issues with a perceived lack of consideration given to communities of interest and other redistricting guidelines. But Schmidt asked the court to look past the process to the eventual product, which he said violated no law.

By ruling in favor of the new legislative districts, the panel of justices appeared to concur with the attorney general’s line of thought.

“Because the Constitution requires this court to enter judgment within 30 days from the filing of the petition, today we announce our decision unanimously upholding the validity, under article 10, section 1 of the Kansas Constitution, of the state senatorial and representative districts,” wrote Justice Caleb Stegall in the decision.

Stegall, an appointee of Republican Gov. Sam Brownback, added that a full opinion with “the facts, rationale, and holdings” was forthcoming.

Because new boundaries were not established before May 10, the filing deadline for for the Aug. 2 primary election for U.S. House, state House and Board of Education races was pushed back from June 1 to noon on June 10. Statewide offices and districts without changes to their districts still must file by June 1.

Up for grabs in 2022: one of the two U.S. Senate seats, all four U.S. House seats, all six Kansas government statewide offices, all 125 Kansas House seats and five of the 10 Kansas Board of Education seats.

Schmidt, the presumptive GOP nominee for governor, applauded the decision.

“We have successfully defended every Kansan’s right to equal protection of the law in exercising their right to vote, as well as the public’s right to establish new districts through their elected representatives,” Schmidt said. I am grateful for the expeditious manner in which the court announced the outcome of the case, and this year’s candidate filings and election preparations can now proceed.”
Many Kansans filed written testimony to the Supreme Court, including the League of Women Voters co-president Martha Pint, who said the Legislature’s allocation of the House districts and 40 Senate districts intentionally fractured communities of color, weakening minority voting strength. Communities of note included Wichita, Olathe, Kansas City, Leavenworth and Lawrence, the latter two of which were the subject of complaints from an intervening party during oral arguments.

Mark Johnson, a Kansas City attorney, represented Democratic Sen. Tom Holland of Baldwin City, who was placed in a new district where he would have to run in 2024 against incumbent Republican Sen. Beverley Gossage of Eudora. Under the bill, Senate district lines would remain the same until 2024, but Johnson argued unsuccessfully that the new maps would leave Kansans confused and misrepresented.

“I think you need to look at the process that led to the district lines that are at issue here, rather than simply the procedure by which the legislation was passed,” Johnson told justices Monday. “It’s a broader question.”
Under the state constitution, the Legislature must produce updated maps for the 125 Kansas House districts, 40 Kansas Senate districts, the Kansas Board of Education and the state’s four U.S. House districts every 10 years. The bill containing the new maps was approved 83-40 in the House and 29-11 in the Senate before Gov. Laura Kelly signed it.