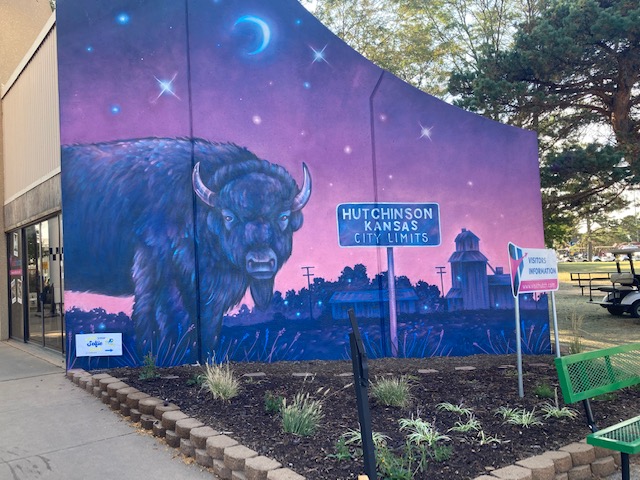 HUTCHINSON, Kan. – A second mural at the Visitor Information Center on the Kansas State Fairgrounds was dedicated Thursday morning. “Cotton Candy Sunset” was funded in part through grants from the Kansas Creative Arts Commission and the National Endowment for the Arts.

Hutchinson Reno County Chamber of Commerce President and CEO Debra Teufel said planning for the mural began after one on the east side of the center was dedicated in 2021. “The conversations quickly started, that we should look at the west side of this building, and what it could become to honor the history of the fair, but also honor the ag history of our rural areas,” Teufel said.

The new mural, similar to the first other one, was designed by Hutchinson artist Brady Scott, who drew from his own childhood experiences coming to the fair from Eureka, where he grew up. Although he only came to the fair two or three times as a child, Scott said he wanted to portray what he experienced in this mural. In summing up his ideas, Scott said “I hope you’re reminded, even as an adult, it’s important to use your imagination to be inspired every day.”

A side note about the elevator depicted in the mural. During a Hutchinson-Reno County Chamber of Commerce membership breakfast this morning, Teufel said the elevator represents what many people refer to as the “Elmer Elevator” near the junction of K-96 and K-14 south of South Hutchinson.