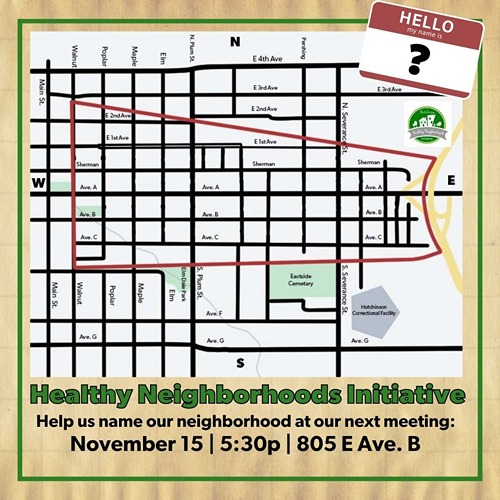 HUTCHINSON, Kan. – The Hutchinson Healthy Neighborhoods Initiative is meeting on Tuesday, November 14, at 5:30 p.m. at The Zone, 805 E. Ave. B, to discuss possible names for its newest featured neighborhood.

Previously agreed upon, official boundaries for the neighborhood will stretch from K-61 west to Walnut Street, between the railroad tracks south of 3rd/2nd Avenues and between Avenues C and D. It becomes the seventh neighborhood to join the Healthy Neighborhoods Initiative.

Residents, homeowners, and business owners within these boundaries are invited to attend Tuesday night’s meeting.

Neighborhood facts: The median home in this neighborhood was built in 1910. According to U.S. Census information, 27% of the population is under age 18, and 14% are 65 or older. The neighborhood includes one public park, George Pyle Park, and three privately owned parks (2 Wheeler Park, Houston Whiteside Park, and the park at The Zone). It also includes the Hutchinson Post Office, City Hall, HMS-7, the Reno County Museum, and several churches.

The Hutchinson Healthy Neighborhoods Initiative is a collaborative approach to improve the marketability of area neighborhoods, making them attractive places residents and newcomers choose to live for an enhanced quality of life.

A couple of incentive programs are specifically available to anyone looking to live in a featured neighborhood. Those include a down payment incentive, up to $2500 toward the down payment to purchase a home for a first-time home buyer. The other is a program through Peoples Bank and Trust, where homeowners can receive an interest-free home repair loan.