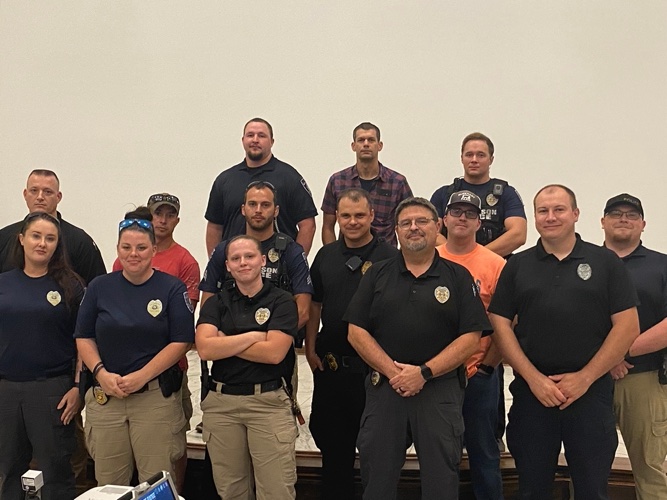 Regarding an incident on Monday, January 31, 2022, the McPherson Police Department received several phone calls concerning a threat communicated on Snapchat to commit violence at McPherson High School. With assistance from the Kansas Bureau of Investigation, the McPherson Police Department identified the suspect who communicated the threat of violence within hours. Officers arrested the suspect for the threats before the suspect committed any acts of physical violence. This same night, officers handled an unrelated incident involving a subject making threats and later attempting self-harm. Officers involved in these incidents worked together to resolve them in a timely and safe manner.

The following Officers were recognized with a Salute for their work:

In an incident on Tuesday, March 15, 2022, Officers Hannah Fisher and Tyler Watts responded to a medical call, regarding a person who was unconscious and not breathing. When Officers arrived, Officer Fisher began chest compressions and Officer Watts set up the Automated External Defibrillator. They continued chest compressions and AED use until the McPherson Fire Department and McPherson EMS arrived on scene and took over medical care. EMS was able to get a pulse back and they transported the patient to the hospital. Officers Fisher and Watts were both presented with a Lifesaving award.

In an incident on Sunday, April 24, 2022, Officer Matt Delair responded to a motel for a stabbing. Officer Delair located the injured victim standing in the middle of the road. Officer Delair, who has previous emergency trauma training through the U.S. Military, recognized this as a life-threatening situation. He applied a tourniquet and stopped the bleeding. McPherson EMS arrived and transported the person to the hospital, where he underwent surgery. Officer Delair was awarded a Lifesaving award.

On Monday, May 16, 2022, the McPherson Police Department held Peace Officers Memorial Day Ceremonies, recognizing the law enforcement officers who have died in the line of duty both in our community and nationwide over the preceding year. Sergeant Katie Conn spent hours putting together a video tribute shown at the Peace Officers Memorial Ceremony at the Community Building. Her video showed great honor to the Officers who made the ultimate sacrifice while serving our community, state, and the nation. This video was also viewed over 6,600 times on social media and shared 80 times, including shares from other law enforcement agencies in and out of Kansas. Sergeant Conn demonstrated her abilities and professionalism in this task, reflecting well upon herself and our Department. Sgt Conn was recognized with a Salute for her efforts.

In the last incident, on Thursday, May 5, 2022, Officer Charlie McFall and Officer Hannah Fisher responded to an apartment complex for the odor of marijuana. Upon arrival, they could immediately smell the odor of burning marijuana. They traced the odor to one of the apartments and contacted a resident inside. Officers saw drug paraphernalia in plain view. The resident allowed officers into the residence and showed them many marijuana plants. The Officers arrested the subject and secured the residence. They completed an affidavit to apply for a search warrant, which was executed by the Officers of the McPherson Police Department and the Kansas Bureau of Investigation. They executed a search warrant on the residence and found items used to facilitate the grow in almost every room in the apartment, and a total of 54 marijuana plants. Officers McFall and Fisher were recognized with a Salute for their efforts, which lead to getting a substantial amount of marijuana being removed from our community.