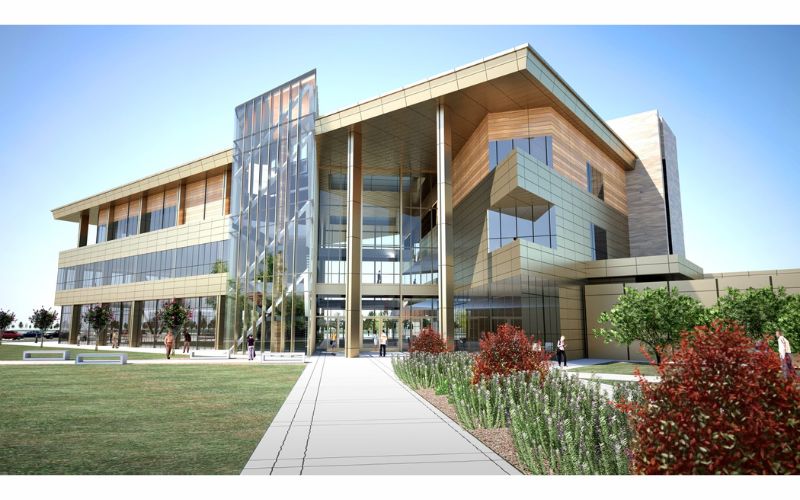 McPherson, Kan.  – McPherson College, a Kansas institution known for its dedication to helping students find balance and success, as well as its innovative Automotive Restoration Technology degree program, is reimagining its campus for the future—funded in part by a successful $55 million capital campaign that will supercharge the largest-ever investment in new buildings in its 135-year history.

McPherson College released renderings today of the three new building projects that will be the centerpiece of this historic campus update: Campus Commons, the Boiler House, and the Holman Center for Athletics. All of these projects have one thing in common: they are built around how students learn and live in the 21st century, giving them the resources and support to do their best work.

Alumni and visitors attending McPherson College’s Homecoming celebration on October 15 will be able to see designs of the new buildings and the progress made toward their completion as part of a walking tour. This will provide the opportunity to envision these projects in their campus setting.

In addition to the new structures, nearly half of the $55 million in new funding will directly support educational initiatives on campus, such as student scholarships, Health Science, Automotive Restoration, and other academic programs and growth areas.

“This is a truly momentous announcement for McPherson College, and nobody deserves it more than our hardworking students, faculty, and staff,” said McPherson College President Michael Schneider. “We are changing the face of our campus in a way that puts the needs of our students first and prepares them for the future, thanks to the tremendous support we have received from across the country.”

The 55,000 square foot Campus Commons will serve as the beating heart of student life on campus, providing a state-of-the-art event venue, service hub, and place to grab a bite—while passing through a three-story atrium with classic cars on display, celebrating McPherson’s one-of-a-kind Automotive Restoration degree program.

$20 million in funding will go to The Commons, a true signature facility that will accommodate McPherson College’s growth and provide a new “front door” to the campus, with a prairie-inspired design that provides a welcome to the city of McPherson.

The building will contain the new campus dining facility, a coffee shop, a student store, flexible coworking and collaboration space, as well as several administrative offices, the new Dalke Center housing Career Services, and a Welcome Center for new students. It is a bold move away from the current student union and toward a center that makes sense for the way students live and study on a 21st-century campus.

The Boiler House is truly the college hangout for the next generation: an indoor-outdoor space with flex seating, yard games, fire-pits, and a large outdoor screen and stage area—the perfect place to socialize and collaborate with classmates. It is an imaginative reuse of McPherson’s existing utility building to create an entirely new campus gathering point. In addition, the Holman Center for Athletics—an expansion of the existing sports facility—will give McPherson’s teams a modernized venue as they compete in a fast-changing dynamic for college athletics.

Beck Design, an architectural firm specializing in higher education and cultural institutions, led the design for McPherson’s new buildings. The firm, which has offices in New York, Oklahoma City, and Tulsa, operates with a mission of creating spaces that enhance the quality of life of those who work, live, and study in them—which the new buildings exemplify.

“It is an honor to play a part in re-imagining the campus of McPherson College, a true gem in this region,” said Paula Beck, Principal of Beck Design. “The Campus Commons and Boiler House in particular truly emphasize our firm’s ethos of collaboration driving innovative experiences for students.”

McPherson is not just building new cutting-edge additions to its campus; it is helping its students enjoy it with significantly less debt. In conjunction with the campus additions, McPherson is also announcing a significant contribution of $3 million toward its pioneering Student Debt Project, which provides matching funds for students who hold jobs while attending school—helping keep costs manageable at a time of rising costs for essential items such as food and transportation. As a result of the Student Debt Project, McPherson College has one of the lowest average student debt at graduation rates among four-year colleges and universities in Kansas, giving students the ability to hit the ground running and take more of the earnings from their first post-college jobs home with them.

“The Student Debt Project has made it possible for me to receive a top-quality college education with the personal touch McPherson provides and graduate with an extremely manageable amount of debt,” said Lola Hipp, a graphic design student at McPherson College. “I have family members who have struggled with college debt, and McPherson has made it possible for me to pursue my education in an affordable way.”

Nearly 40% of all McPherson students were engaged in the Student Debt Project during the last school year, with participants in the program achieving a higher-than-average 3.3 GPA. Nearly 60% percent of participants had less than $2,000 in debt by the end of the last semester—with half of those students already becoming debt free. And 93% of students who participate in the Student Debt Project have remained in school.

“I am very proud that the most forward-thinking college town is in the middle of the country,” said Mayor Tom Brown, Mayor of McPherson, Kan. “I have a feeling this is not the last time McPherson College will be making news. Great things are ahead for our college and our city.”

Today’s transformative investment in the future of McPherson College was catalyzed by a $25 million donation in May from philanthropists Melanie and Richard Lundquist, which marked the Lundquists’ first significant donation outside of their California home. Their gift has helped attract other donors.

“When I first learned about McPherson College through my interest in classic cars, I was immediately inspired by the sincerity and work ethic of the students and the way they were empowered by the culture on campus,” said Richard Lundquist. “It felt right to make this special place our first significant philanthropic investment outside our home state and shine more light on the magic happening on the Plains.” Lundquist recently joined McPherson College’s Board of Trustees.

McPherson College offers more than 30 undergraduate degree programs to its more than 800 students, representing 33 states and seven countries. Its nationally renowned Automotive Restoration Technology degree program has earned the support of car collectors, including icon Jay Leno, and its students plan to compete at one of the automotive world’s signature events, the Concours d’Elegance at Pebble Beach, Calif. next year.

Favorite Fall Event, Burnin’ Down Main is Saturday in McPherson