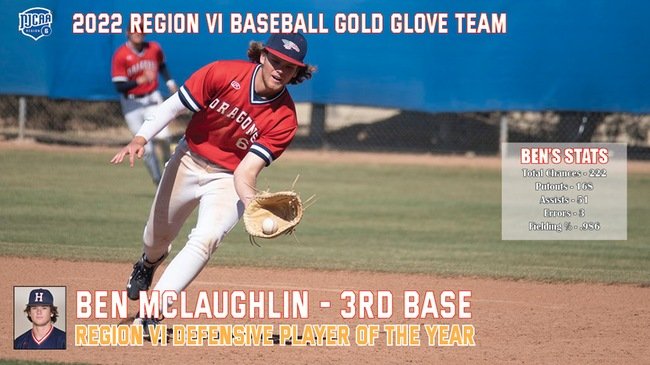 The sophomore from Golden, Colorado, started the season at first base and then moved to third base on March 24. He committed no errors at third base over the final 32 games of the regular season and had just two errors at the hot corner all season long.

The University of Arkansas commit fielded .986 this season with only three errors in 222 fielding chances this season.

McLaughlin had a 16-game and 13-game hitting streak this season. He had 29 multi-hit games (17 two-hit games and 12 three-hit games) and 23 multi-RBI games this season.

McLaughlin was named the NJCAA National Player of the Week on May 11, going 11 for 16 with three doubles, three home runs and 11 RBIs in a four-game series against Dodge City.

STERLING SUTCLIFFE – 1st-team All-KJCCC; 2nd-team All-Region VI
A sophomore from Dallas, Texas, Sterling Sutcliffe turned around an extremely slow start to the 2022 season. Hitting just .069 on March 9, Sutcliffe hit .320 for the remainder of the season and had a power surge that led him to tie McLaughlin for the team home run lead.

Sutcliffe had two stretches with home runs in four consecutive games. The Blue Dragon right-fielder tied a Hutchinson single-game record with three home runs and had eight RBIs – second most in Blue Dragon single-game history – against Colby on April 23. That game was part of a torrid six-game stretch where Sutcliffe was 12 for 20 (.600) with six home runs and 22 RBIs.

Over a team-high 78 innings pitched, Whitlock allowed 82 hits, 41 runs and 22 walks with 44 strikeouts this season. Whitlock posted a record of 5-2 with a 3.33 ERA in eight Jayhawk West starts. He also earned one postseason victory, defeating Fort Scott in the opening game of the Region VI opening-round series on May 11.

Perhaps Whitlock’s best single game of the season came on April at Seward County. Whitlock allowed just one unearned run and only five hits over seven innings as the Blue Dragons rallied with two runs in the top of the seventh for a 2-1 victory on April 1.

Whitlock also had a complete-game victory over Pratt on April 28.


Hunter Gotreaux wound up with the second-most hits and fourth-highest batting average this season and was among the team leaders in stolen bases.

Gotreaux had a season-high 12 game hitting streak this season with 18 multi-hit games, including two four-hit games.

Gotreaux hit .374 with 40 hits in conference play this season.

BRAEDYN SOMMER – Honorable Mention All-KJCCC
Taking over as the full-time designated hitter and leadoff batter for the Blue Dragons on March 15, Braedyn Sommer became a dependable batter at the top of the order.

Sommer was second on team with a .366 batting average (48 for 131) with five doubles, four triples and seven home runs. The Stillwater, Oklahoma, product scored a team-high 69 runs and had 33 RBIs. He was a perfect 10 for 10 in stolen bases. Sommer posted a .475 on-base percentage.

He hit .386 in conference play this season with a .472 on-base percentage.

The Buhler High School product had a .583 slugging percentage and had 28 extra-base hits, including 17 doubles this season.

Henderson’s biggest single game this season was as 3 for 4 game with two home runs, seven RBIs and a walk-off single to help the Blue Dragons defeat eventual league champions Barton 12-11 on April 9 at Hobart-Detter Field.

JACK TOROSIAN – Honorable Mention All-KJCCC
The sophomore from Omaha, Nebraska, also got off to a slow start with a .100 batting average over his first 20 at-bats. From that point, Jack Torosian ‘s average steadily climbed and reached .300 for the first time this season on April 2.

Babin had just one error in 102 fielding chances this season. He had two outfield assists.