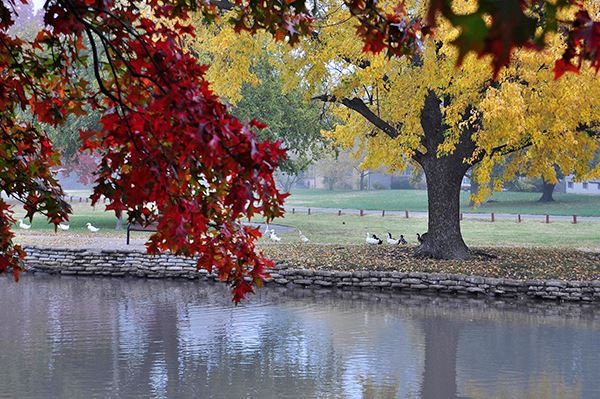 McPherson, Kan. – A bank restoration project on the Lakeside Park Lagoon in McPherson could result in the removal of over three dozen trees in the park.

This led to an extended discussion during the McPherson City Commission study session on Tuesday.

The tree removal, including some of the oldest and most significant trees in the park, was defended by Public Works Director Jeff Woodard, who noted the significantly higher cost to build a new retaining wall inside the existing wall versus replacing the existing wall where it is. Placing a new retaining wall inside the existing wall would require a 3-4 course wall compared to a 2-3 course wall as proposed, with an added cost of around $300,000. This does not include dewatering for suitable fill costs, which could raise what is currently estimated to be a $1-3 million project.

City Forester Kody Kramer voiced concerns about the tree removal along with impact on trees from construction work based on what has happened during the now in progress Wall Park bank restoration. Specifically, as it relates to one large tree on the north end of the water garden. Kramer said if current practices continue, that tree could succumb to all of the soil and root disturbances and compaction.

The city has a current permit from the Division of Water Resources for the Lakeside Park project which expires at the end of 2022. A six month extension is possible for the current plan, but if major changes are made to it a new permit would likely have to be obtained.

Mayor Tom Brown directed Kramer and Woodard to meet to discuss the issues and try to come up with a possible solution.