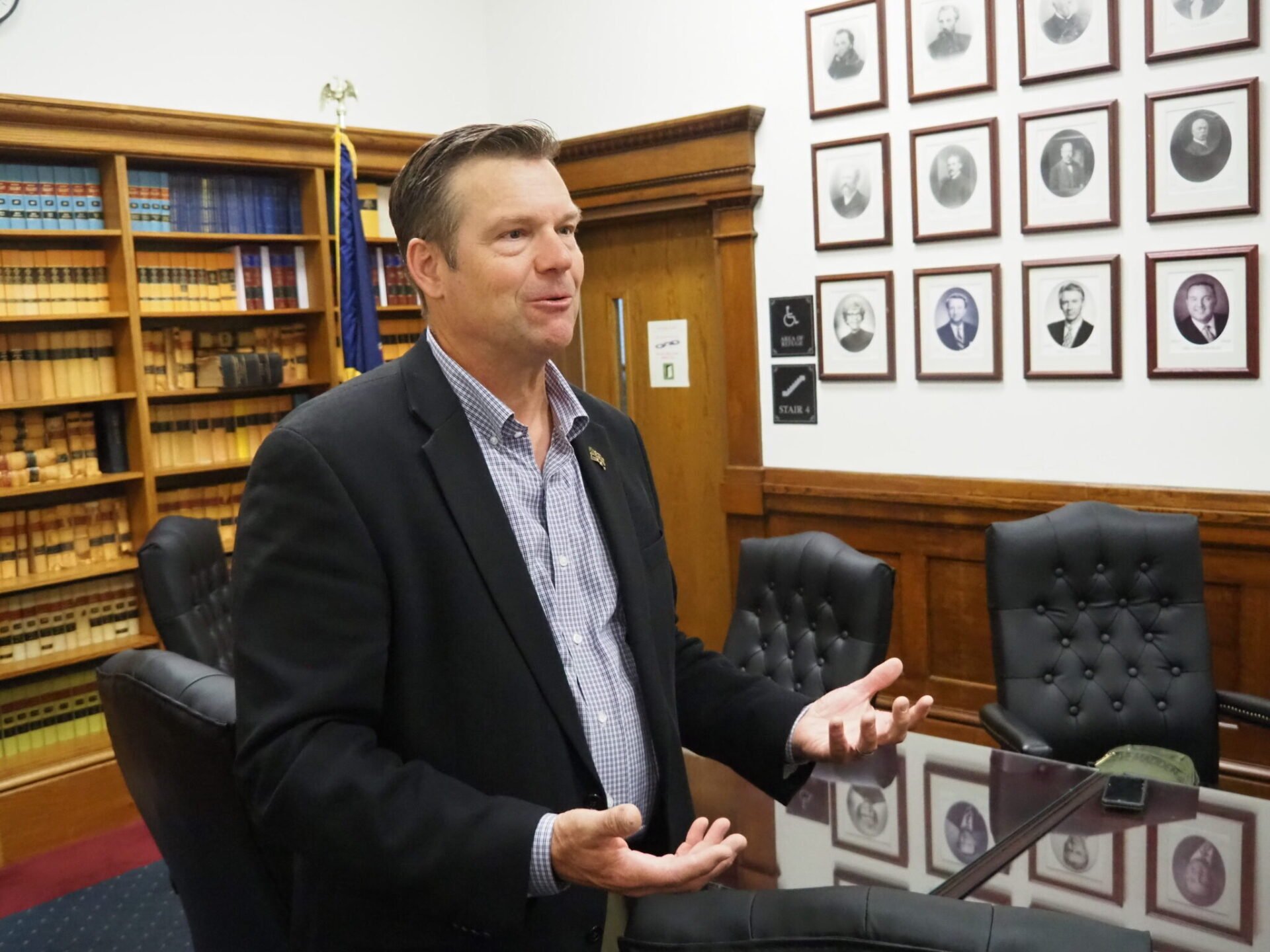 Former Secretary of State Kris Kobach files as Republican candidate for attorney general and vows to make abortion, election, gun law a focus along with pushing back against Biden administration. (Tim Carpenter/Kansas Reflector)

Kobach, who ran unsuccessfully for U.S. Senate and governor, will be competing in the Aug. 2 primary with state Sen. Kellie Warren and former U.S. prosecutor Tony Mattivi. The lone Democratic candidate is attorney Chris Mann. The job is open because Attorney General Derek Schmidt wants to be governor.

Kobach said he would work as attorney general to advocate for the constitutional right to bear arms and for reduction of state regulation on carriers of concealed firearms. He proposed creation of a special unit in the attorney general’s office to concentrate on lawsuits against the administration of President Joe Biden or agencies of the federal government. He would hire perhaps three lawyers he’s worked with in the past to assist in that legal work.

“On a host of issues from vaccine mandates to attempts to restrict our Second Amendment rights, the Biden administration and its allies in Congress have disregarded the constitutional limits on federal power. The most important officer who can fight back against such unconstitutional actions is a state attorney general,” Kobach said.

Kobach said Texas established a prototype civil litigation division, but Kansas could be a major contributor to litigation against the Biden administration. He said Biden had stretched boundaries on fossil fuels, immigration and COVID-19 vaccination mandates.

Kobach also said he would resume prosecution of alleged voter fraud in Kansas, but expressed confidence the state’s elections were “relatively clean.” He had been a central advocate of providing the secretary of state prosecution powers in election cases and took on a dozen cases when he held that job.

In terms of the 2020 presidential election lost by GOP candidate Donald Trump, Kobach said evidence of voter fraud in Pennsylvania and Michigan appeared to have been sufficient to reverse outcomes.

“I think there was extensive fraud in the presidential election,” Kobach said.

Kobach issued a five-point strategic plan that included a commitment to advancing state restriction on abortion. He supports the Value Them Both amendment on abortion on the August primary ballot as well as movement by the U.S. Supreme Court to reverse the Roe v. Wade federal decision legalizing abortion nationwide. In addition, he would welcome drafting of bills by the Kansas Legislature to reduce opportunity for abortions in Kansas.

“There are a dozen different ways the Legislature could go,” he said. “One option might be heartbeat legislation. Another option could be pain legislation.”

He also said as attorney general he would expand the role of the attorney general in confronting consumer fraud, especially of the elderly. He said he would work to eliminate the state’s conceal-and-carry licensing fee in Kansas because it was wrong of government to put a price on a person exercising a constitutional right.

Kobach, 56, of rural Lecompton competed in the 2020 GOP primary for U.S. Senate. He lost that race to determine who replaced retiring U.S. Sen. Pat Roberts to Congressman Roger Marshall, who went on to win the general election.

In 2018, Kobach narrowly defeated Gov. Jeff Colyer in the GOP primary for governor. Kobach was defeated in the general election by Democrat Laura Kelly, who is seeking reelection as governor.