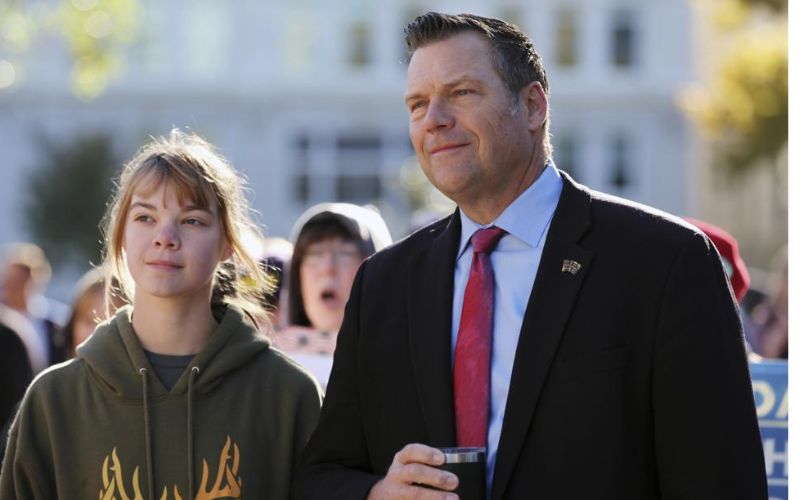 Kobach, of the historic territorial town Lecompton, served two terms as secretary of state before experiencing campaign hiccups in a 2018 loss for governor and the 2020 defeat for U.S. Senate. He rebounded Tuesday in the open primary for attorney general on strength of his significant name recognition and the loyalty of conservatives.

Warren was the choice of the Kansas Chamber, Kansans for Life, Kansas State Rifle Association, Kansas Livestock Association as well as former U.S. Secretary of State Mike Pompeo and U.S. Sen. Roger Marshall. In 2021, the Kansas Chamber’s president said he was concerned Kobach was incapable of effectively representing Kansas businesses and individuals in court.

“The establishment was against me from the moment I got in the race,” Kobach said. “Victory means I’ll be able to move forward with my plan to sue Joe Biden on multiple issues, when I think he’s violated the constitution or federal statute.”

Warren, of Leawood, congratulated Kobach and expressed gratitude to people who devoted time, talent and money to her campaign. During the primary, she repeatedly asserted Kobach was a risky choice because he could again win a GOP primary only to lose again in the general election.

“We’ve made many great friends in this campaign and I’ve been honored to have the support of people across all walks of life,” she said.

The third wheel in the Republican primary campaign for attorney general was Tony Mattivi, a former federal prosecutor from Topeka who received 20% of the primary vote. In an election day appeal, Mattivi said he was the only GOP candidate in the race who wouldn’t “embarrass our state” as attorney general.

Some were quick on social media to blame Mattivi for Warren’s second-place finish because a fraction of Mattivi’s 91,400 votes would have made a difference when added to Warren’s 175,555 vote total. Unofficial results indicated Kobach brought in 195,701 votes. Put another way, Kobach netted 42% to Warren’s 38%.

Chris Mann, a former prosecutor and police officer from Lawrence who won the Democratic Party’s nomination for attorney general, said Kobach was getting ahead of himself.

“Kansans will have a clear choice for attorney general this fall, between a politician and a public servant,” Mann said. “The stakes are too high to entrust the top law enforcement office in Kansas to a politician. Violent crime has been on the rise for a decade, Kansans are being preyed upon by corporations and prescription drug companies, and at every turn politics threatens to distract and disrupt the priorities of the attorney general.”

The job of attorney general is up for grabs because Derek Schmidt, the Republican currently occupying that job, won the GOP nomination for governor. He will compete against Democratic Gov. Laura Kelly, independent candidate Dennis Pyle and Libertarian Seth Cordell in November.

Kelly received 259,306 votes in her Democratic primary race against Richard Karnowski, who landed a mere 17,077 votes. It meant 94% of those partisan voters blackened the oval next to Kelly’s name. Schmidt received more votes than Kelly in the primary, but a smaller percentage of the overall GOP ballots cast. Schmidt’s total was 363,546, or 81% compared to candidate Arlynn Briggs’ 87,431 or 19%. During the campaign, Briggs gained attention for being arrested on a threat charge.

Republicans Steven Johnson and Caryn Tyson entered the GOP campaign for state treasurer with similar backgrounds. He’s a farmer from Assaria in central Kansas and she’s a farmer from Parker near the Missouri border.

Both served since 2011 in the Legislature, and both had a prominent role in development of state tax policy. A dispute about their work and votes on tax issues mushroomed in final days of an otherwise sleepy campaign that was periodically punctuated by Johnson’s colorful campaign ads.

When votes were tallied after midnight, they both had 50% of 426,669 Republican primary votes cast. More precisely, Johnson had 213,660 to Tyson’s 212,882 — a gap of less than 800. But there remain uncounted votes, including provisional and mail-in ballots.

Not even Secretary of State Scott Schwab, the state’s top election official, anticipated heavy turnout despite keen voter interest in a proposed abortion amendment to the Kansas Constitution.

Schwab theorized 36% or 644,000 of the state’s 1.9 million registered voters would participate in the primary. Instead, 47% or 908,000 Republican, Democratic, Libertarian or unaffiliated voters showed up to determine fate of the amendment.

The vote on the amendment wasn’t close: 59% opposed the idea of changing the state constitution to eliminate the right of a woman to receive an abortion.

Schwab, a Republican seeking election to a second term as secretary of state, survived a stiff challenge from Mike Brown, a former Johnson County Commission member.

The unofficial results released from Schwab’s office showed the incumbent with 239,306 or 55% of the vote to Brown’s 194,061 or 45% of the vote. Rarely do primary challengers come within striking distance of a Kansas Republican incumbent.

Brown’s campaign benefitted from heavy spending by the Election Integrity PAC. It poured mailers into Kansas households accusing Schwab of failing to secure elections in Kansas. Indeed, Schwab insisted they were free and fair.

Brown promised if elected to require a photograph identification card to vote by mail, ban the use of “unsecure” ballot drop boxes, verify the accuracy of voter registration lists and “eliminate voter fraud and mismanagement of our elections.”

U.S. Senate candidate Mark Holland of Kansas City, Kansas, won a six-person Democratic primary with 38% of the vote to earn the right to oppose U.S. Sen. Jerry Moran, who prevailed with 81% of the GOP primary vote.

Meanwhile, two of three Republican members of the Kansas State Board of Education were defeated by primary challengers.

Garden City incumbent board member Jean Clifford lost the District 5 primary by 5,000 votes to Hays resident Cathy Hopkins, who had lost campaign last year for Hays School Board. Incumbent Ben Jones of Sterling lost by 9,000 votes the District 7 primary to Dennis Hershberger, a Hutchinson resident and chairman of the Reno County Republican Party.

Board member Jim Porter, of Fredonia, was able to hold off by more than 11,000 votes the primary challenge by Luke Aichele, a McPherson barber who defied COVID-19 protocols and accused health officials of acting like Nazis distributing propoganda.

Unofficial Election Results, Some Races Too Close To Call