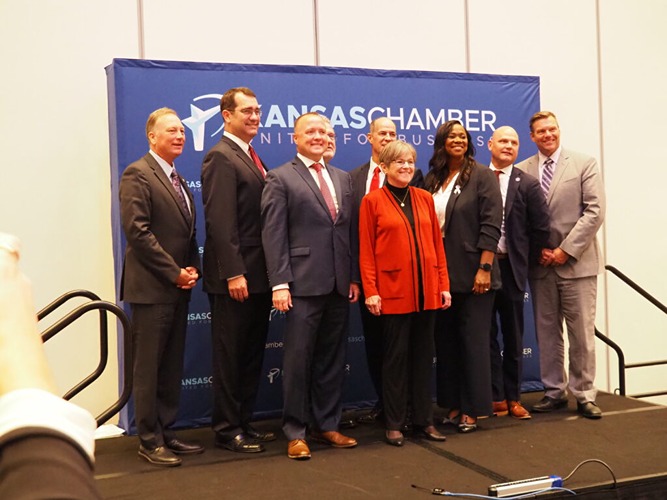 It’s unclear whether Kansas officials will be forced to grapple with legal challenges of results or demands for ballot recounts in the manner of the August primary.

Schmidt was so anxious about possibly being undermined by Pyle that he released a commercial late in the campaign declaring “shady liberal groups” were propping up Pyle in a quest to split the conservative vote for benefit of Kelly. FiveThirtyEight, which averages polling results, had Kelly up 48.6% to Schmidt’s 43.5%.

“Look at what we’ve accomplished together in just four years,” Kelly said. “Bringing home 52,000 new jobs, eliminating the food tax, shutting down the bank of ‘K-DOT’ slush fund, building up a healthy rainy day fund, turning a massive deficit into a surplus, securing the single largest economic development project in our state’s history and fully funding our schools.”

Down the ballot, candidates for attorney general — surging Democrat Chris Mann and controversial Republican Kris Kobach — gave rise to another toss-up for statewide voters to sort out. Mann, a former Lawrence police officer, made his first attempt at elective office. Kobach served eight years as secretary of state and has experience running campaigns for governor in 2018 and U.S. Senate in 2020.

Mann emerged in one poll with a 1.1% edge over Kobach, but the 3% margin of error indicated the race was anyone’s guess. That survey followed the Kobach campaign’s anti-crime commercial that included an image of professional golfer Tiger Woods and portrayed him as a ruthless “cop killer.”

Also to be resolved were contests for secretary of state, treasurer and insurance commissioner. Winners of races for the Kansas House, and one special election in the Kansas Senate, as well as the Kansas Board of Education will be determined.

Those low-key contests clashed with the robust race in the 3rd congressional district, which was gerrymandered by the 2022 Kansas Legislature to help GOP nominee Amanda Adkins take out U.S. Rep. Sharice Davids, the lone woman and Democrat in the state’s federal delegation.

If the latest polling could be believed, Davids held a double-digit lead and could coast to a third term. Problem? Campaigns of Adkins and Davids didn’t put much stock in those numbers.

On the legal front, six members of the Kansas Supreme Court and seven members of the Kansas Court of Appeals are on the ballot for retention votes. It’s a simple “yes” or “no” proposition. However, anti-abortion forces tried to orchestrate ouster of five justices viewed as insufficiently conservative with a preposterously misleading mailer to voters. Several Supreme Court justices worked to convince voters there was merit to an independent judiciary.

Kansas voters also will be asked to sort out a pair of proposed amendments to the Kansas Constitution. Neither are as compelling as the August primary ballot amendment on abortion. The first would require sheriffs to be elected in most instances and limit government authority to oust these county law enforcement leaders. The other would give the Legislature authority to veto regulations created by the executive branch.