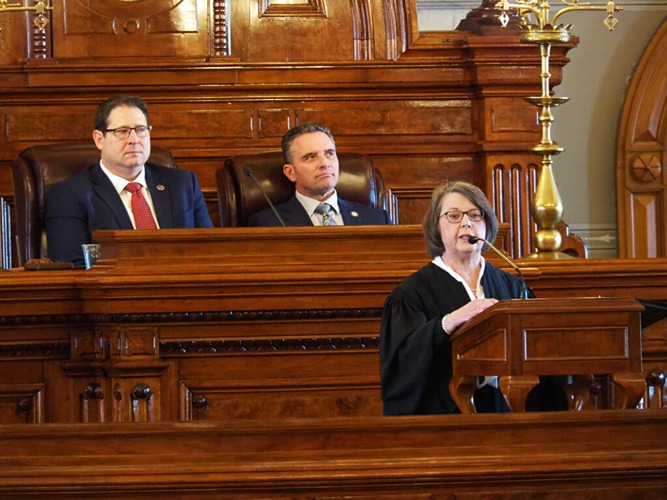 TOPEKA, Kan. — Kansans voted to keep all six state Supreme Court justices up for retention on the November ballot. The justices were returned with more than 60% voter support, including two who voted in favor of abortion rights.

Luckert and Biles voted to protect abortion rights in a 2019 ruling that said the Kansas Constitution’s right to bodily autonomy includes the decision to terminate a pregnancy. Stegall, who was appointed by former Gov. Sam Brownback, dissented in the abortion ruling. Standridge, Wall and Wilson were appointed by Gov. Laura Kelly after the 2019 decision. Kansas Supreme Court justice Eric Rosen won’t face a retention vote until 2026.

The debate around judicial retention intensified after rejection of the August abortion amendment, which would have declared that women don’t have a state constitutional right to abortion. Following the vote, anti-abortion activists have been campaigning to oust Supreme Court justices that didn’t align with their views.

Kansas uses a merit-based screening process for Supreme Court justices. A nine-member commission reviews applicants and sends three nominees to the governor, who makes the final pick. After serving for a year, new justices are placed on the ballot for a retention vote and then subject to retention votes every six years. The merit-based system has been in place since the 1950s.

Two Lawrence voters said they had decided to vote out the judges, though the decision wasn’t made in regard to abortion rights.

Ken Farrar said he voted “no” on retaining all the judges on principle, saying he wanted to make sure judges were in touch with the Kansas public.

“It’s the easy thing to do to just keep them in play,” Farrar said. “Go back to practicing law, be a commoner again.”

Troy Squire said he voted out all but one justices, saying he wanted to make sure there was accountability in the system.

“I’ll always vote them out if I don’t know what they’re doing especially,” Squire said.

“We applaud the voters of Kansas for their wisdom in voting to retain the six Supreme Court Justices on the ballot Tuesday,” the statement read. “Kansans have sent a clear message that they want the Judicial Branch of government to remain impartial and free from political pressure and interest groups. The election results mean that Kansans want their Justices to do their jobs and hold politicians accountable to the people and to the Kansas Constitution.”

Ahead of the election, right-leaning political strategists have been accused of sending mailers meant to confuse voters on judicial retention. One mailer sent out seemed to be pro-choice, saying that Kansans had showed their support for abortion rights and needed to show this pro-choice support again.

On the other side of the mailer, it said to “vote no” on judicial retention, in a attempt to seemingly trick voters into voting against justices who had supported abortion rights.