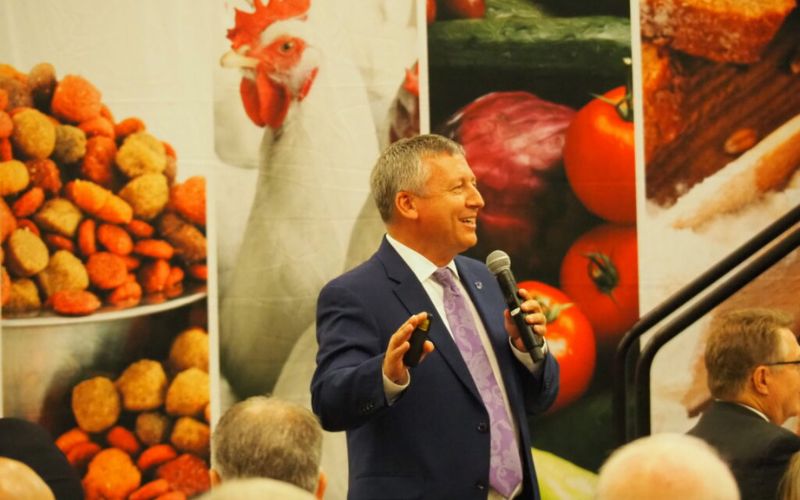 Kansas State University president Richard Linton said during the governor’s agriculture conference in Manhattan the land-grant university was working to raise $75 million in private donations by March to qualify for a $25 million grant from the state. It’s part of a $125 million plan to improve facilities to spark development of agriculture research and innovation centers. (Tim Carpenter/Kansas Reflector)

He said the university received a $25 million grant from the Kansas Legislature and embarked on an effort to raise $75 million in private gifts to qualify for a supplemental 3:1 match from the state, or another $25 million. The cash would be used to overhaul the College of Agriculture’s presence on campus by renovating two buildings and adding another.

The deadline for securing and certifying the $75 million in contributions is March 2023.

“Our challenge is that we’ve got to make this happen,” said Linton, who officially started his job at Kansas State in February. “We’re working hard. It’s time for agriculture.”

Linton urged 400 participants at the Kansas Governor’s Summit on Agricultural Growth to support the campaign by advocating for Kansas State and, potentially, by making donations to the special fund. A comparable campaign at North Carolina State University, where he previously worked, gained traction by collaborating 44 commodity groups in that state.

Challenges at Kansas State centered on the 21% student enrollment decline — about 4,000 students — in the past eight years, Linton said. That lost revenue hurt the university’s budget, weakened opportunity to improve faculty and staff compensation and delayed improvements in campus facilities, he said.

Linton said Kansas State had placed renewed emphasis on raising more money for student scholarships. He said KSU would advance a proposal to charge out-of-state students with 3.9 or higher school grade-point averages the lower in-state tuition rate. That program would offer a discount to nonresident students with 3.25 or higher GPAs.

In addition, he said, Kansas State would more directly engage Kansas communities at town halls and through other means to explain the university’s place in their lives and explore how the university might be more directly beneficial to Kansans. The expected the approach would lead to enrollment of 500 to 1,000 more students in fall 2023, he said.

Gov. Laura Kelly, who is seeking reelection against Republican nominee Derek Schmidt, said agriculture contributed nearly $70 billion to the Kansas economy and fueled nearly 240,000 jobs in 2021. She said Kansas exported a record $5.35 billion of agricultural goods in the past year.

“The Kansas ag industry is the life blood of this state,” Kelly said. “Given we saw record-breaking agricultural exports last year, I’ve never been more confident in the agriculture community’s ability to lead our state toward continued success.”