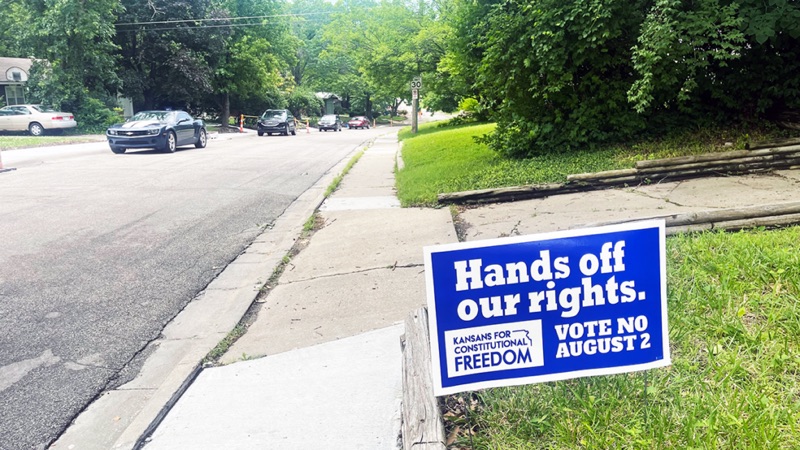 TOPEKA — Kansas lawmakers and activists across the political spectrum present emotional and starkly contrasting responses Friday to the U.S. Supreme Court’s decision to overturn Roe v. Wade, ranging from celebration to outrage to calls for action.

With a proposed constitutional amendment on the August primary ballot offering a vote on whether to maintain a Kansas constitutional right to abortion, the U.S. Supreme Court decision raised already high stakes in Kansas. Under a state Supreme Court ruling, Kansans maintained that right even after the ruling from the nation’s highest court.

Conservatives across the state celebrated the victory while Democratic legislators blasted the decision, but both were quick to remind voters of the significance of the “Value Them Both” amendment as they head to the polls. Aug. 2.

“Here in Kansas, however, we still have work to do because of the deeply flawed Hodes decision released by the Kansas Supreme Court, which wrongly invented an unlimited right to abortion in our 1859 constitution, and recklessly put into question even our most basic protections for women and their unborn children,” said Senate President Ty Masterson, an Andover Republican.

“Abortions are and will remain safe, regulated and accessible in Kansas, thanks to our state constitution,” said Rep. Jennifer Day, D- Overland Park. “We will maintain those rights when we vote NO on the constitutional amendment question on ALL ballots on August 2nd.”

Passage of the amendment would nullify a 2019 state Supreme Court ruling that said a right to bodily autonomy in the state’s Bill of Rights included a woman’s right to an abortion. The amendment contains no exemptions for pregnancies because of rape or incest or to save a pregnant woman’s life, but it would not stop the state government from passing such exceptions into state law.

Even with months to prepare, the decision was a devastating blow to personal autonomy, said Senate Minority Leader Dinah Sykes.

“Abortion is a personal decision,” the Lenexa Democrat said. “The right to abortion is protected by the Kansas constitution, and we’ve got to keep it that way. I will not let my colleagues in the legislature take that freedom away from my fellow Kansans — not without a fight.”

Kansas Attorney General Derek Schmidt, a Republican candidate for governor, backed the decision and concurred with the idea that Roe was wrong from the start. He said this decision returns the power to decide these matters where it belongs: with the people, not a federal court.

A rise in abortions in Kansas over the past two years was among the reasons Schmidt said the decision was necessary. The Kansas Department of Health and Environment’s 2021 report on abortion statistics shows an increase of 4.1%, from 7,542 abortions reported in 2020 to 7,849 in 2021.

“I prefer a future with less abortion, not more,” Schmidt said. “To preserve existing limits on late-term abortions, requirements parents be notified when minors seek abortion and prohibitions on using taxpayer funds to pay for abortion, I will join with other pro-life Kansans in casting my vote for Value Them Both.”

While the 2021 increase was almost entirely due to Kansas residents, between 2019 and 2020 the number of annual abortions increased by 630, driven by 528 girls and women primarily from Texas and Oklahoma. Abortion rights organizations say the Kansas numbers, when looked at as a whole, show the effect of restrictive policies in neighboring states.

Kansas GOP executive director Shannon Pahls celebrated the decision and said Kansas must endeavor not to become like states with more widespread access to abortions, like California and New York.

“Kansas Republicans will continue to advocate for the right to life and push back against the Democrats’ radical pro-abortion agenda,” she said. “Our work is not done.”

Democratic House candidate for District 52, Derik Flerlage, tweeted that abortion should not be governmentally managed.

“As a born and raised Catholic, abortion has been a topic I’ve dealt with from a very young age,” Flerlage wrote. “At the foundation of it all, I do not believe that the government should be involved in personal health decisions.

“It’s an incredibly complex moral issue that shouldn’t be mandated,” he continued in the following tweet. “Once again — advocacy for pro-life groups could continue. Improving sex education and contraceptive access is critical. These are issues we can’t properly discuss on social media.”

Micah Kubic, the executive director of the American Civil Liberties Union of Kansas, said this decision would back many Americans into a corner and usher in a “life-threatening public health crisis.”

“Access to abortion shouldn’t depend on where we live, how much money we make or the color of our skin,” Kubic said. “We should be able to make the best medical decisions for ourselves and for our families — without a government bureaucrat sitting in the exam room next to us.”

Ashley All, of the coalition Kansans for Constitutional Freedom, said the decision was “unprecedented” and “shameful.”

Reducing or eliminating access to local, free and on demand abortions is a hit to American freedom, said Zack Gingrich-Gaylord of Trust Women.

“Over the past 10 months, we have seen the dire consequences of abortion bans that force pregnant people to travel hundreds of miles to access essential medical care,” Gingrich-Gaylord said. “We have seen this play out in our own clinics in Oklahoma and Kansas, all while Roe remained the law of the land. For many people in our region, however, reality has been ‘post-Roe’ for decades.”

Ryan Reza, president of Kansas Young Democrats, has spent the day sharing resources and advocating for abortion rights on Twitter. He reminded those affected by today’s news to take a minute to process it.

“First, take a breather,” Reza tweeted. “This one is hard, and there are folks who deserve time to collect themselves. Take it easy the rest of the day.”

Reza encouraged Kansans to vote no on Aug. 2.

On flipside, Mackenzie Haddix, a spokesperson for the Value Them Both Coalition — led by Kansans for Life, the Kansas Catholic Conference, and Kansas Family Voice — said the group was continuing efforts to ensure the passage of the amendment.

“Today’s decision on Dobbs v. Jackson emphasizes the importance of our democracy, restoring the power to the states to decide how and if they are going to place limits on the abortion industry,” Haddix said. “The U.S. Supreme Court restored the people’s ability to come to individual consensus on abortion limits — but not in Kansas. As it stands today, unelected judges in Kansas are the ones who will decide the fate of abortion limits.”