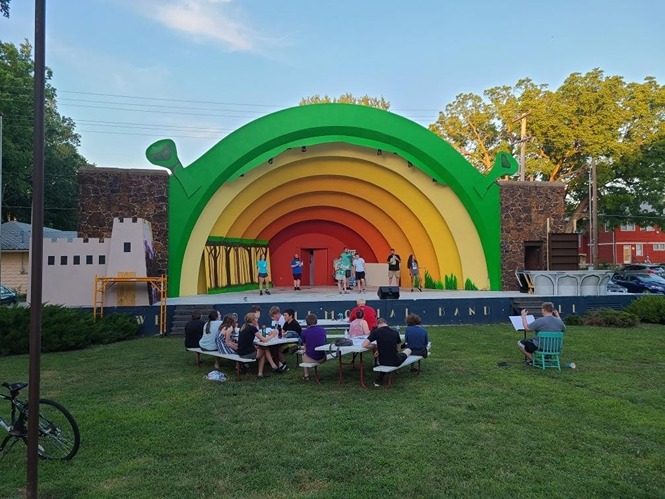 LINDSBORG, Kan. – Lindsborg’s long-running outdoor theatre, Broadway RFD, returns to the stage the next two weekends with Shrek the Musical!

Each summer, talented members from the Lindsborg community and surrounding areas come together to put on the highest quality production.

“Blistering heat and thunderstorms have been part of the backdrop for rehearsals for the cast and crew of Shrek the Musical as they approach opening night of Broadway RFD’s 2022 offering in Swensson Park,” said first-time director Barb Hilt. “It’s been hot, but it’s been a great time so far.”

The show highlights the adventures of an ogre named Shrek and his quest to find peace again after his tranquil swamp is invaded by a host of storybook characters. Hear about the musical from the perspective of cast members in this just-released video.

Hilt is the theater director at Salina Central High School and heard from a friend about the opportunity to work in Lindsborg this summer. That tip turned into a perfect fit for her to take the helm of this fast-moving musical. “The way the community comes together and supports this show is amazing!” Hilt said.

Hilt has been sewing by day and directing by night as she and her sister Robin have contributed their artistic touches to the costumes. “Robin really has an eye for making that work and I have just kind of pitched in with the needle and thread,” she said.

All general admission tickets are available for purchase online or at the gate ($7 for children 4-12 years old; $15 for ages 13 and up). VIP seating tickets are only available online at this time.