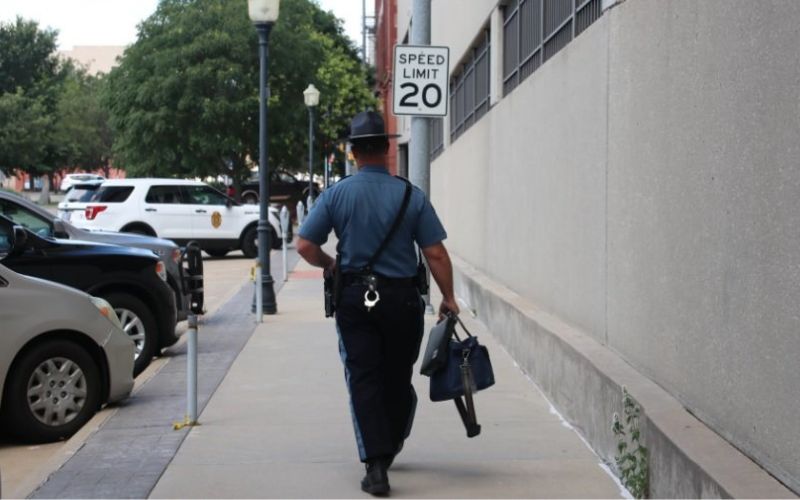 Topeka, Kan. (KPR) — The Dodge City Police Department struggles to keep officers. Stress, in an era where police complain they’ve become pariahs, only makes it harder to hire and keep officers on patrol.

All that turnover means more work for the officers that remain, which could bring on more burnout.

“We asked these people to do so much more with less staff,” said Deputy Police Chief Jerad Goertzen. “When we’re putting so much more on them and asking them to do more, (it) seems like burnout is hitting a little bit earlier.”

A week after making that observation, two more people had put in their resignation letters.

Law enforcement agencies across the country are straining to hire. Job postings that used to get hundreds of applicants now have a fraction of the interest. Officers are logging more overtime, morale is low and jails are struggling. Sedgwick County, for instance, is spending $2.3 million to install cameras in its jail to compensate for the people it can’t hire.

“I haven’t seen this in my 33 years of being in law enforcement,” said Sedgwick County Sheriff Jeff Easter. “So many people are shying away (from) law enforcement.”

In Dodge City, it used to take three years on the job before an officer could even apply for the modest promotion to corporal — the first step up. But the department lowered that requirement, along with requirements for sergeant, because the pool of promotion-eligible applicants was so small.

A decade ago when Goertzen tested for promotion, he had to compete with about 10 other officers, some with more than seven years of experience. The most recent class of applicants was about half that size.

High turnover rates also mean the majority of officers in Dodge City have fewer than five years of experience.

“There’s so much law and constitution … and just getting comfortable with the job itself and gaining confidence, you really don’t know the job until year four or five,” Goertzen said.

Newer officers still in training means the department isn’t doing as much proactive policing as it wants to. Goertzen would like to station officers in certain areas to prevent crime and get to know the community better, but he doesn’t have the staff to do that.

“Oftentimes our people are bogged down,” Goertzen said. “A lot of times it doesn’t feel like we can be a proactive police department.”

Multiple agencies agree — finding more officers or jail staff is harder than it was before.

Finney County Undersheriff Steven Martinez said the county jail is used as an entry-level position that people work in before becoming an officer. Two people are waiting to be moved to patrol, but their promotions can’t go through until the department can replace them at the jail.

Poor pay, long hours and a stressful work environment are chasing people away from police work, agencies told the Kansas News Service. A 2019 survey(link is external) from the International Association of Chiefs of Police found that 78% of agencies struggle to recruit qualified candidates, 65% say not enough people apply to jobs and 25% eliminated positions because they couldn’t attract staff. These responses came before the pandemic and before staffing shortages plagued businesses in almost every industry.

Roughly one in five sworn positions at the Kansas Highway Patrol are vacant. Lt. Candice Breshears said “social, political and economic forces” are making it hard to hire despite recent raises.

“The recruitment shortages cannot be limited to one single cause,” she said, “but public perception of law enforcement is one of the social factors.”

Multiple other agencies said a low public regard of the police makes it hard to recruit.

“I always tell community leaders, we can’t have it both ways,” Smith said in March. “ You can’t go out and bash the police and then say, ‘Why don’t we have good police?’”

One month after that interview, The Kansas City Star reported(link is external) Smith’s department was rife with racism and lacked diversity in its workforce. And the Kansas Highway Patrol is being sued by multiple past troopers for gender discrimination and a hostile work environment, but Breshears said KHP can’t comment on lawsuits and whether that hurts the department’s ability to recruit.

“I’d like to see more applicants. I would like to see more people,” Goertzen said. “It’s partially our fault in this profession, the stigma that’s around it. … We do have police that tarnish the reputation of what a police officer is meant to be. That is our job to correct that.”

Agencies are deploying new recruiting tactics, like posting more openings on social media, but Goertzen isn’t sure how the situation will improve. He said it is harder to build community relations when departments are so understaffed, but he has some optimism about the future.

“It’ll come back,” he said. “The nobility is always there in this job.”