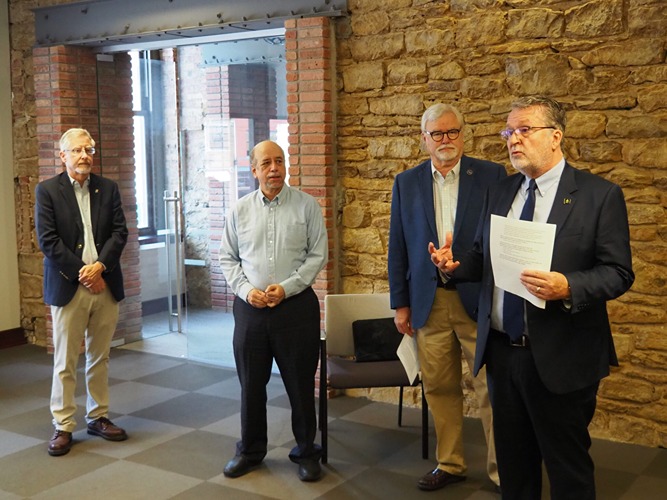 President Joe Biden’s new federal loan forgiveness initiative would slash federal student loan balances of millions of people by as much as $20,000. It wouldn’t offer relief to Zito because she took out private loans to attend New York University and University of London.

“I have a 5-year-old son,” she said. “I’m still paying my student loans, and I have to save for his education.”

Under the proposal from Democrats to be filed before the 2023 legislative session in January, a $150 tax rebate would be available to parents of college-age children to help pay for college fees, books and supplies.

The plan would also create a tax credit for Kansas businesses voluntarily contributing to student loan payments on behalf of employees. The credit modeled on Connecticut law would allow companies to claim a refundable 50% state tax credit for subsidizing loan repayments. The maximum credit would be $5,250 per student per year. No single employer could claim more than $500,000 in credits in a single tax year. The measure would cap cost of the program to the state at $5 million annually.

Each provision of the plan from Democrats would be applicable to students attending a university, community college or technical college in Kansas.

“I hear from Kansans on a weekly basis about their financial concerns,” said House Minority Leader Tom Sawyer of Wichita. “More often than not, student loans are one of the pain points. Parents worry about paying their own student loans while taking on the burden of a child’s student loans, too.”

The Kansas Department of Revenue estimated the annual cost of the package would be $44 million. The bulk of the total, potentially $39 million per year, would be tied to the $150 individual income tax credit on college expenditures.

State Treasurer Lynn Rogers, who administers the Learning Quest saving program, said the reform bill would extend from Dec. 31 to April 15 the deadline for people to qualify for state income tax deductions on the prior tax year’s income. The maximum annual deduction through the program is $6,000 for joint filers.

“A well-educated Kansas workforce remains one of the most critical components to the economic growth of our state,” Rogers said.

Chris Courtwright, who served on the tax reform council assembled by Gov. Laura Kelly, said elements of the plan were considered by the council before the decision to focus on eliminating the state’s sales tax on groceries by July 1.

The Legislature adopted a three-year phase out of the 6.5% sales tax on groceries, but the governor recommended the 2023 Legislature adopt an immediate end to the state’s portion of that tax.

“A lot of us anticipate a robust debate on tax policy in the upcoming 2023 session,” said Courtwright, who indicated the $44 million package would be a modest component of the next round of state tax reforms.

State Rep. Jerry Stogsdill, a Prairie Village Democrat, said lifting the weight of college cost and debt ought to be a bipartisan issue.

“We want to make sure that any post-secondary student has the means to gain the education to become a productive, skilled and well-compensated employee or business owner,” he said.

U.S. Rep. Ron Estes, a Republican from Wichita, said he opposed Biden’s student loan forgiveness program because the program would cost as much as $300 billion over the next decade. He linked the Biden strategy to legislation adopted by Congress that conservatives believe contributed to rising inflation.

“This election-year gimmick does nothing for Kansans who worked through school to avoid debt, took side jobs to pay off loans early after graduating or chose to invest in other career paths outside of a four-year degree,” Estes said.