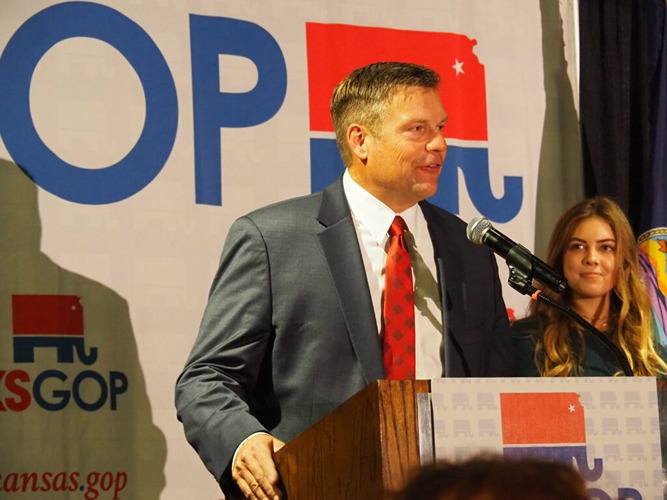 At midnight, Kobach took to the Kansas GOP watch party stage to announce his win.

“I don’t care who you are, or where you come from, you gotta love a comeback story,” Kobach said.  “Know that my victory is not about me. It’s about a desire to save our state and save our country. I’m so honored that so many Kansans put their trust in me.”

Kelli Kee, Mann campaign spokeswoman, said that the race wasn’t over yet.

“There are tens of thousands of ballots that have yet to be counted by elections officials. We will wait until every vote is counted. That is the democratic process. Every Kansan deserves their voice to be heard,” Kelli Kee said in a released statement. “Kris Kobach has a record of disenfranchising voters, misleading voters and preventing eligible Kansans from participating in our elections. It’s time he follow the law and wait for votes to be counted.”

At midnight on Election Day, Kobach had 479, 329 votes to Mann’s 465,004 votes. Kobach said he would work to protect women’s sports and would fight President Joe Biden’s administration.

“The Attorney General’s Office is essential in holding the line in defending our Constitution and defending the rule of law in this country. And that’s what we intend to do,” Kobach said.

Kobach has emphasized border control and election security throughout the race. He has said Kansas is at risk from fentanyl flowing in from the border with Mexico and that he would work with southern law enforcement agencies if elected, as well as crack down on retail crime.

“From day one, the message hasn’t changed,” Mann said. “We’ve been about public safety over politics, and that’s resonated across the state. And as we’ve gotten that message out there, that’s what’s moved the numbers and put that momentum in our favor because people are tired of career politicians who just want to pursue their own agenda.”

Kobach has emphasized border control and election security throughout the race. He has said Kansas is at risk from fentanyl flowing in from the border with Mexico and that he would work with southern law enforcement agencies if elected, as well as crack down on retail crime.

Incumbent Republican Scott Schwab gave his victory speech during the Kansas GOP election party after receiving 58% of the vote, 550, 394 votes out of the 942,141 votes reported so far.

Schwab said his re-election proved that the Republican Party was still functional and that the GOP message still resonated with Kansans.

“I don’t care what the results are of all the other races. The party is still a party,” Schwab said.

Schwab also said he believed that freedom was not a function of democracy, but came from God, in his victory speech.

Democratic newcomer Jeanna Repass ran on a platform of restoring public confidence in the state’s electoral process and increasing voting accessibility in Kansas.

During the only secretary of state debate on Nov. 2, the two tussled over election deniers, with Repass saying she understood why some Kansans didn’t believe that elections were secure. Schwab said election deniers needed to be ignored, instead of supported in their dangerous beliefs.

Johnson, a Kansas House member, aligned himself with Kobach and Attorney General Derek Schmidt, the GOP gubernatorial nominee. Johnson said he would stop the influence of a “constant stream of woke policies” from President Biden’s administration.

In his concession speech, Rogers said Johnson took advantage of extremist rhetoric during the race. Rogers said he would continue to fight the rise of extremism in Kansas.

“This race was increasingly politicized, with our opponent pushing extreme solutions

where common sense would do,” Roger said. “I’ve spent enough time working on your behalf that I understand the extreme solution is rarely the first step one should take. I will work to block

extremism from taking root in our state.”

Schmidt filed for re-election in 2020, two years ahead of schedule. As a Topeka pharmacist who represented Shawnee and other counties in the Kansas Senate, Schmidt won election as insurance commissioner four years ago with the largest vote total of a statewide candidate.

In her celebration speech, Schmidt said she would continue to eliminate wasteful spending and reduce fees.

“Tonight we celebrate, and tomorrow we’ll be back working again,” she said.